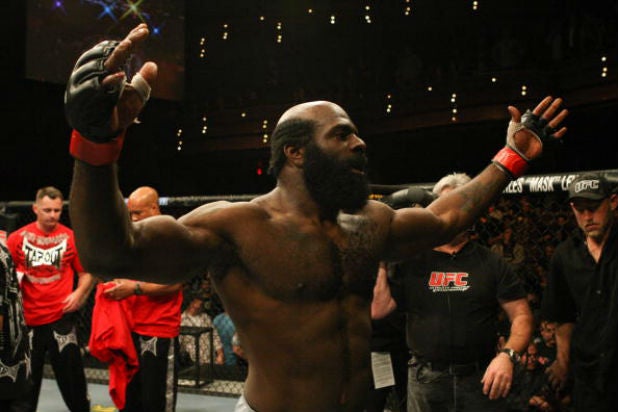 Mixed martial arts fighter Kimbo Slice, who died Monday at age 42, needed a heart transplant, according to the Sun-Sentinel.

Slice, whose birth name was Kevin Ferguson, had been hospitalized near his home in Coral Springs, Florida, earlier in the day and passed away at 7:30 p.m. ET.

While the official cause of death has not yet been released, he had previously been admitted to the Northwest Medical Center in Margate, Florida, on June 3, complaining of “severe abdominal pain, shortness of breath and nausea,” according to information the hospital reported to Broward County‘s medical examiner’s office.

Slice was found to have a liver mass and congestive heart failure, and was placed on a ventilator in intensive care, according to details of the report published on Tuesday by the Sun-Sentinel. As his condition declined, doctors advised his family that he would need a heart transplant, the report states, and he was scheduled to be transported to Cleveland for placement on a donors list.

Mike Imber, Slice’s longtime manager and childhood friend, confirmed to ESPN.com that the late Bellator MMA fighter visited the Northwest Medical Center on June 3, but had appeared to be doing better over the weekend.

“He went to Germany around March and got really sick while he was there,” Imber told ESPN. “I don’t know what he thought it was, but he just felt sick. On Friday (June 3), he had bad chest pains and went to the hospital. I went and visited him on Friday and he seemed OK. I didn’t feel like I was going to lose my friend in two days, by any means.”

Also Read: 10 Most Brutal Kimbo Slice Fights: From Backyard to the Octagon (Videos)

Bellator president Scott Coker confirmed the death of the fan favorite Monday night. “We are all shocked and saddened by the devastating and untimely loss of Kimbo Slice, a beloved member of the Bellator family,” he said in a statement. “One of the most popular MMA fighters ever, Kimbo was a charismatic, larger-than-life personality that transcended the sport.

“Outside of the cage he was a friendly, gentle giant and a devoted family man,” Coker continued. “His loss leaves us all with extremely heavy hearts, and our thoughts and prayers are with the entire Ferguson family and all of Kimbo’s friends, fans and teammates.”

Slice first gained acclaim for his street fights, which were filmed and posted on YouTube in the early 2000s, transforming him into one of the world’s first online viral video stars. He parlayed that into becoming one of the biggest ratings draws in the history of mixed martial arts.

He last fought at Bellator 149, on Feb. 19 in Houston, Texas. Slice (5-2) defeated Dhafir Harris, a.k.a. Dada5000, in a three-round decision. The result was later changed to a no-contest by the Texas commission, after Slice tested positive for anabolic steroids and an elevated testosterone ratio.

Slice was also the subject of a 2015 documentary titled “Dawg Fight,” which is currently available on Netflix.

He was still signed to Bellator MMA at the time of his death and was scheduled to headline Bellator 158 on July 16 in London against James Thompson.