On Wednesday’s “Jimmy Kimmel Live,” Jimmy Kimmel kicked off his monologue by talking about the attempted recall of California Gov. Gavin Newsom, which by now of course everyone knows failed spectacularly.

But Kimmel wasn’t that concerned about the leading opposition candidate, Larry Elder, who couldn’t even manage to muster up 20% of the total vote. Instead, Kimmel was deeply amused by how poorly vanity candidate Caitlyn Jenner did in the election. (Hilariously bad by the way.)

Kimmel has had an interest in Jenner’s entrance in the recall election before of course. For instance he noted previously how she seemed to be spending more time playing golf than campaigning. Kimmel also called Jenner out for her cruel stance on homelessness. But on Wednesday’s episode of “Jimmy Kimmel Live,” Kimmel just laughed about the results.

But before he got there, he broke down the situation for his audience. 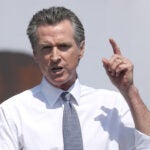 “Can you win – an election – you didn’t want to happen? It’s like coming home from work, you say “good news honey.  The guys at the office dug a hole and pushed me in it – but they decided not to fill it back up with dirt,” Kimmel began.

“You’ve had that happen. Right? We all have. Yesterday, Gavin Newsom didn’t not win. He didn’t get fired. Not even close. He trounced the clown car full of candidates who were running against him,” Kimmel said. “The cost to our state was about 300 million dollars.  Which I think is the third-most expensive dinner at French Laundry ever.”

“The top Republican vote getter, radio host Larry Elder, was surprisingly gracious in defeat. He accepted the results of the election. I forgot what it was like to see a Republican do that,: Kimmel continued. “It’s like every once in a while you see a chicken fly and you’re like, ‘Oh yeah they’re birds.'”

That’s when he got to Jenner. 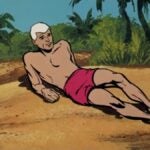 “Most of the candidates made a final push yesterday — including America’s sweetheart Caitlyn Jenner — who seemed to be unaware that she had a better chance of winning another Olympic gold medal than the Governorship,” Kimmel said. “Was it though? I mean, what happened was… Caitlyn Jenner finished 13th.”

“If this was Dancing with the Stars – she’d have been gone the first week. That’s how bad it was. So I guess it’s back to waving down Teslas in the parking lot at the E! Network, begging for another shot.” Ouch.

Watch the whole monologue above. The stuff about the recall vote happens pretty much at the start.