During his monologue Wednesday, Jimmy Kimmel talked about a lot of things, from the Los Angeles Lakers’ crappy season, to the Capitol fox. One amusing moment came when he talked about “Our Great National Parks,” the new Netflix documentary series produced by former President Barack Obama.

Or rather, Kimmel ran a fake trailer for the show that managed to sort of ding Obama for being pretty much absent for several years, but also leveled with people about how much the world is doomed, and promised that the “adorable” animals featured in the show would help take your mind off of it. Also, it featured someone doing an absolutely spot-on Obama impression — or, more likely, a beautifully edited series of repurposed Obama audio clips.

“Hey everybody, it’s your old pal, Obama,” the commercial begins. “Join me in a celebration of our planet’s greatest national parks and wilderness. I know you’re going through a lot, and I haven’t really been in touch, but come on, look, look at these cute animals.” 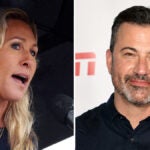 Also Read:
Marjorie Taylor Greene Claims She Called the Cops on Jimmy Kimmel Over a Will Smith Joke

Then footage showed a fish walking on land. “I call this one Mitch McConnell. Get it? Because of the neck,” faux-Obama narrated. “Yeah, you get it. Look. I won’t sugar coat it. The world is going to s— in a paint bucket. But animals aren’t worried.”

“I mean, if that isn’t adorable, I don’t know what is. Listen America, I’m sorry everything blows. But hot damn, this otter is precious. So join me in this celebration of our planet’s greatest national parks and wilderness before everything’s on fire, and all that’s left is strip malls and abandoned Blockbuster video stores. Hey look, Ted Cruz,” the commercial said as it ended with a photo of this notoriously ugly fish.

The show comes out next week, but you can watch the Kimmel version of it above now. The fake Obama commercial begins 4 minutes and 47 seconds in.