Jimmy Kimmel kicked off Thursday’s episode of “Jimmy Kimmel Live” by talking, of course, about the biggest news of the day, the death of Queen Elizabeth II of the United Kingdom at age 96.

And during his monologue, Kimmel wondered if her death might have happened now due to the messy drama surrounding the film “Don’t Worry Darling” and the whole “spitgate” thing involving two of the film’s co-stars, Chris Pine and Harry Styles. You can watch the whole thing above now, but we’ll break it down below.

Now we assume most of you know what we’re talking about, but just in case, “Don’t Worry Darling” is a thriller directed by Olivia Wilde, starring Florence Pugh, Pine and Styles. Over the summer there’s been a huge amount of gossip about behind-the-scenes drama, like whether or not Pugh is actively distancing herself from the film — possibly due to conflict over the relationship between Wilde and Styles that began during filming.

The film premiered at the Venice film festival this week and during the premiere, social media lit up over a video that appeared to show Styles spitting on Pine at the premiere. Both actors have strongly denied such a thing happened and have expressed respect for one another. Nevertheless, plenty of people aren’t convinced. You can read more here. 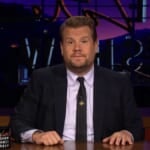 Anyway, back to Kimmel.

“Queen Elizabeth II passed away at the age of 96 today. I hope you’re not just finding out about it. She was the Queen for 70 years, longer than any monarch in British history,” he said as he kicked off the monologue.

“To put it in perspective for Americans, this would be like if Kris Jenner died here. The Queen is known as England’s rock. And we don’t have a rock in America. The closest thing we have to a rock in America is The Rock,” he continued.

“But 96- that’s a pretty good run. I feel like if you die anywhere on the FM radio dial, it’s… My goal is to make it to Hot 97 or, maybe even Power 106! Who knows,” Kimmel said, mentioning a couple of very big radio stations.

“When you think about all the people that the Queen has met with over the last 70 years, it’s really remarkable. She met anyone from Lady Bird Johnson to Lady Gaga. From Bill Clinton to Will I Am. She met JFK and J-LO. She’s met The Beatles and the Spice Girls. She met The Iron Lady and The Iron Throne. Ol’ Blue Eyes and the Blue Man Group. President Truman and The Truman Show. She stood up to fascists… and she stood behind them,” Kimmel added, as photos of her various meetings were displayed onscreen. 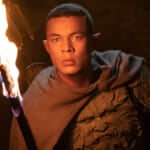 Also Read:
Why J.R.R. Tolkien Is Really Turning in His Grave – Over the Racist Backlash to ‘The Rings of Power’

“And then, after all those years, this week, she saw Harry Styles spit on Chris Pine,” Kimmel joked. And said ‘OK. I’ve had enough.'”

“So, we send positive thoughts to our friends in the UK, and also to all the American Aunts who are obsessed with the royal family for reasons I will never understand,” Kimmel concluded.