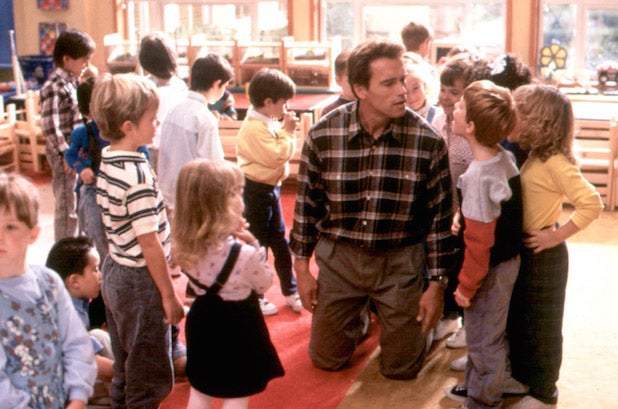 Arnold Schwarzenegger‘s beloved 1990 comedy “Kindergarten Cop” is getting the remake treatment from Universal’s 1440 Entertainment division, which has set its sights on a home video release, an individual familiar with the project has told TheWrap.

Unlike the “Terminator” series, Schwarzenegger will not be back this time, having graduated from the franchise long ago.

Ivan Reitman directed the original movie, which starred Schwarzenegger as a cop who’s forced to go undercover as a kindergarten teacher in order to catch a drug dealer whose son attends the school.

Also Read: Remake of Freddie Prinze Jr. and Paul Walker Movie 'She's All That' in the Works at Weinstein Co., Miramax

While Schwarzenegger’s female partner, Det. Phoebe O’Hara, was played by Pamela Reed, the title character will be teamed with an Indian sidekick named Sanjit this time around. The duo will be looking for a missing flash drive from the Federal Witness protection program and on the run from Albanian villains according to Roger Friedman at Showbiz 411, who first reported the news.

As for a love interest, expect there to be another beautiful teacher to fill the heels formerly worn by Penelope Ann Miller.

Also Read: Arnold Schwarzenegger on His Killer Snapchat Game and Blowing Sh*t Up for Charity

It would’ve been fun to see Universal remake this for the big screen with Chris Hemsworth or Vin Diesel replacing Schwarzenegger, but this direct-to-video remake can make up for that by bringing back Linda Hunt as the no-nonsense principal. At least give us another adorable ferret!