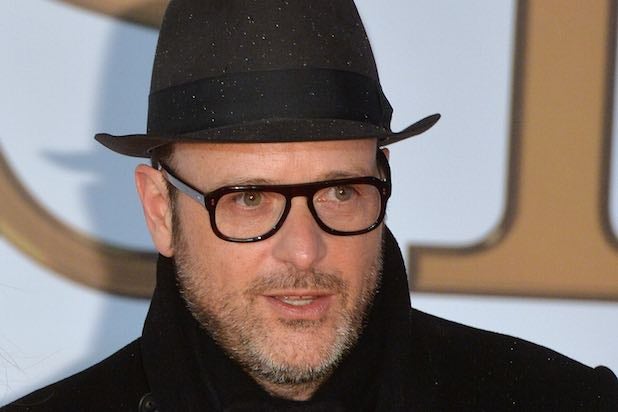 Haven’t seen Matthew Vaughn‘s R-rated action flick “Kingsman: The Secret Service” yet? Then you may want to click elsewhere, because a minor scene that has gotten everyone’s attention is about to get spoiled.

Vaugh, who also directed “Kick-Ass” and “X-Men: First Class,” defended his decision to end the 20th Century Fox spy movie with a princess rewarding the hero for saving the world by offering him — wait, are you still here?

“Some bloody feminists are accusing me of being a misogynist,” Vaughn told Entertainment Weekly. “I’m like, ‘It couldn’t be further from the truth.’ It’s a celebration of women and the woman being empowered in a weird way in my mind, which will cause a big argument again I’m sure. It’s meant to be tongue-in-cheek and crazy.”

Like much of the movie that opened to over $40 million while competing with box office juggernaut “Fifty Shades of Grey,” the moment is meant to subvert a major action movie cliché. How many times have we seen the guy get the girl after saving the world?

More specifically, James Bond would always get the girl, and the writers would use cheeky innuendos to make damn sure viewers understood that. Vaughn and co-writer Jane Goldman, however, decided to just skip the innuendo.

“I studied all the old movies, especially the Bond ones. At the end of ‘Moonraker,’ he’s floating around in space on Dr. Goodhead and they say, ‘Bond is attempting reentry.’ In ‘The Spy Who Loved Me,’ he says he’s ‘keeping the British end up,'” Vaughn explained. “The innuendo is pretty strong and always comes from the men. I just thought it would be great to turn it on its head by having the woman say it. I actually think it’s empowering.”

The majority of critics welcomed Vaughn’s take on the genre, but 27 percent counted on Rotten Tomatoes took issue with its propensity for vulgarity.

“The movie is so desperate to be irreverent that a captive princess says to the hero, ‘If you save the world, we can do it in the a - - hole,'” New York Post critic Kyle Smith wrote. “Isn’t it romantic?”

RogerEbert.com critic Peter Sobczynski described the bit as “not-particularly-amusing,” and feminist writer Tara M. Clapper listed several issues with it in her review for The Geek Initiative.

“It undermines the male lead,” Clapper wrote. “He’s treated women respectfully throughout the whole film — defending his abused mother, assisting [fellow Kingsman recruit] Roxy and acting as her equal, and fighting Gazelle as the serious threat that she is. Although the encounter is consensual, he’s still taking advantage.”

Vaughn said the joke wasn’t left in the movie for “20 percent who were offended by it,” and explained that while there was “a lot of debate” about it, the scene “just felt a bit flat” without butt sex.

“It just didn’t feel as brave as the rest of the movie is,” Vaughn said. “There’s not right or wrong about movies, but I was surprised when people are saying to me, ‘I loved the movie. I think it’s great, but I was offended by that.’ I said, ‘Really? That’s more offensive than exploding heads, massacres in church, swearing, people being cut in half?’ I was like, come on. It’s just a joke. It’s not even graphic.”

In a message to the “20 percent” bothered by the scene, Vaughn added: “Lighten up a little bit. It’s about pushing boundaries and having a bit of fun. It’s not meant to be offensive, and it’s definitely not misogynist or any attack on women. That’s for sure.”