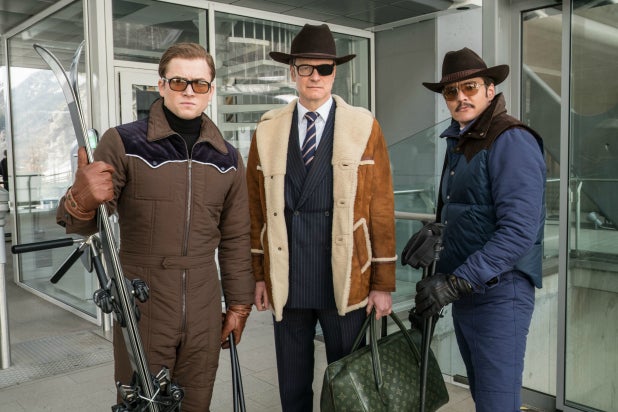 20th Century Fox’s “Kingsman: The Golden Circle” took the No. 1 spot at the box office from “It” this weekend with an estimated $39 million opening from 4,003 locations. It’s a solid opening that’s slightly above the $36.2 million opening made by the spy sequel’s predecessor, “Kingsman: The Secret Service,” and just a step below pre-weekend projections of $40 million.

“The Golden Circle” had a much more mixed critical reception than “Secret Service” did, earning 51 percent on Rotten Tomatoes  compared to its predecessor’s 74 percent. But audiences were kinder to the film, giving it a B+ on CinemaScore. Overseas, the film made $61 million from its rollout in 64 markets, giving it a $100 million global start. “The Secret Service” grossed $414 million during its run in 2015.

“It” continues to put up strong numbers, finishing in the No. 2 spot in its third weekend with $30 million and a running total of $266 million, the best for any R-Rated horror film. In third place is another Warner Bros.’ offering, “The Lego Ninjago Movie,” which underperformed with a $21.2 million opening against a $70 million budget and studio projections of $27-32 million. It’s also 60 percent below the $53 million opening made by “The Lego Batman Movie” earlier this year.

In fourth is “American Assassin,” which made $6.25 million in its second weekend for a ten-day total of $26.2 million. Jennifer Lawrence’s “mother!” and Reese Witherspoon’s “Home Again” complete the top five in a virtual tie with an estimated $3.2 million each. Entertainment Studios’ horror film “Friend Request” finished outside the top five with just $2 million from 2,569 screens.