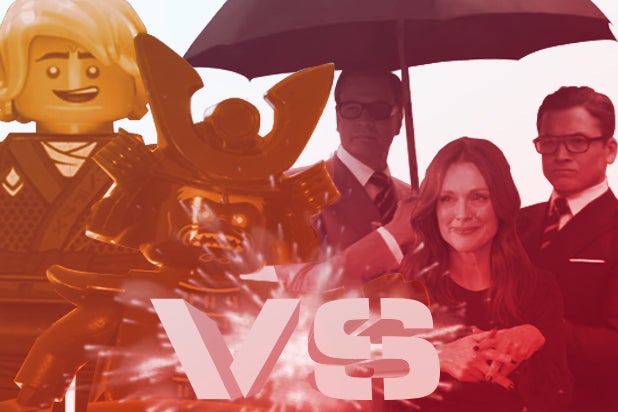 After dominating the box office for the past two weeks with no serious opposition, “It” is about to get some company in the form of Fox’s “Kingsman: The Golden Circle” and Warner Bros.’ “The Lego Ninjago Movie,” both of which should add to what has already been a very lucrative September.

According to data from comScore, grosses since Labor Day are up nearly 40 percent compared to the same time frame last year, and the year-to-date deficit has dropped below five percent compared to 2016 after growing to as much as six percent in the wake of a dismal August.

It seems that box office booms seem to have just switched months.

While 2016 saw “Suicide Squad” carry the box office through August and was followed with a quiet September, 2017 is seeing the exact opposite with the record-breaking “It” pushing returns out of the doldrums. And while “Kingsman” and “Ninjago” won’t break records the way “It” did, they should, combined with a robust third-weekend performance from the Stephen King horror, put this weekend’s total results on the same level as the previous two weekends.

“It shows you the see-saw nature of the industry,” says comScore’s Paul Dergarabedian. “We’ve heard studios talk about how they can release a big film any time, but now they’re really putting their money where their mouth is. The ‘It’/’Kingsman’/’Ninjago’ combo should make September almost seem like summer, and that really doesn’t happen,” he added.

“Kingsman: The Golden Circle” is expected to take the No. 1 slot this weekend, with both studio and independent projections expecting an opening in the low $40 million range from 4,000 screens against a $104 million budget. The sequel’s 2015 predecessor, “Kingsman: The Secret Service,” grossed a $36.2 million opening from its mid-February release, going on to gross $128.2 million domestic and $414 million worldwide against an $81 million budget. Reviews for the film have been mixed so far, with Rotten Tomatoes currently giving it 56 percent.

“The Lego Ninjago Movie” is projected by trackers to make a solid $35 million this weekend, with WB putting its target a little lower at around $30 million. That’s a drop from the $69 million made by “The Lego Movie” and the $53 million made by “The Lego Batman Movie” earlier this year, but that is to be expected as “Ninjago” sports a lesser-known franchise and doesn’t dabble in the pop culture references the previous films used to gain crossover appeal.