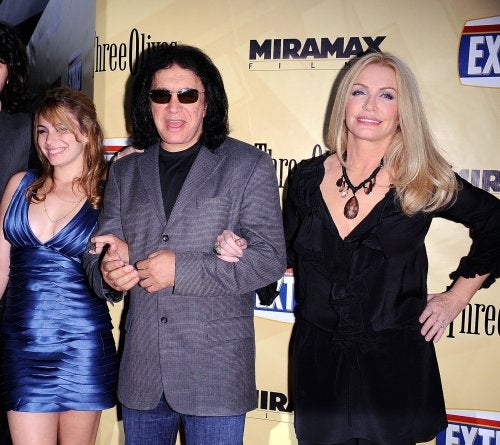 Normally The Grove shopping mall is regarded as a laid-back oasis of urban consumerism, but for Nathaniel Marlowe and Cynthia Manzo it became a scene of terror that, legal papers say, has left them emotionally shattered, unable to work and incapable of enjoying their marital bed.

In other words, they ran into Gene Simmons outside of Nordstrom.

It all started innocently enough last December 19, according to a 24-page lawsuit filed by the couple in L.A. County Superior Court. According to Marlowe and Manzo, Marlowe recognized the KISS frontman standing near Nordstrom and Abercrombie & Fitch. Armed with a Flip video camera, Marlowe approached the Demon and “simply and politely,” asked what any shopper in Marlowe’s situation would, namely, “What do you think of monogamy?”

What followed forms the basis of a dispute between the two sides. According to Marlowe and Manzo, Simmons choked Marlowe, head-butted him, threatened his life and, for good measure, stole his Flip. Manzo claims that she then gave chase, imploring Simmons with the words, “please sir, give us back our camera.”

Simmons’ response, the suit claims, was to give Manzo the same treatment, minus the head butt, ending the brief encounter with the promise, “I will kill you!” Simmons then drove off with the Flip and the couple has never been the same. Days later they applied for a restraining order against Simmons, only to have it denied by a judge who found the singer posed no future threat to Marlowe and Manzo.

On December 24 the pair filed their lawsuit, alleging, among other things, assault, battery, infliction of emotional distress and “trespass to chattel.” (That would be the Flip.) These violent actions, the suit claims, inflicted “severe and lasting nervous shock and injuries” on the couple. Not only that, but Marlowe and Manzo have “suffer[ed] and will continue to suffer in the future, loss of consortium, loss of society, affection, assistance and conjugal fellowship, all to the detriment of their marital relationship.”

The suit doesn’t specify what compensation the couple is seeking, although it should be noted that the court-form box indicating “Unlimited” damages has been checked.

Simmons has since lawyered up, hiring Manatt, Phelps & Phillips, which is sort of the Abercrombie & Fitch of law firms. In a prepared statement, attorney Barry Mallen described the lawsuit as “opportunistic” and “riddled with distortions and false accusations.” The Simmons version of events is that he and his wife, Shannon Tweed, and their daughter Sophie (all pictured), had just emerged from The Grove’s cineplex when they “were accosted by the thin, tall, tattooed Marlowe, who jumped at them and started yelling in their faces.”

This narrative has Simmons simply protecting his daughter by standing between her and Marlowe, who allegedly pursued the family as they left the area. Simmons also took Marlowe’s “device” while he “moved Marlowe aside” long enough for the women to reach the family car. Simmons denies using force against either Marlow or Manzo, though the statement is silent about the fate of the Flip.

The Christmas Eve filing of the lawsuit neatly filled a holiday news vacuum, and so Marlowe and Manzo were able to get their side of this Rashomon-like story out early and unimpeded. The couple is represented by personal-injury attorney Matthew Nezhad, who did not return a call from The Wrap in time for deadline. The two sides will square off in civil at a date yet to be determined.