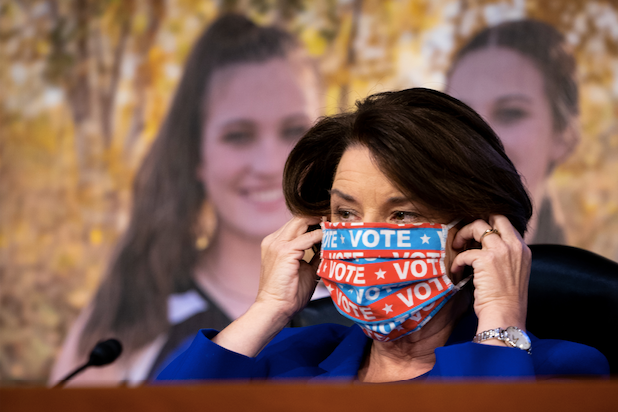 Klobuchar called the hearing “a sham,” just as fellow Democrat Sen. Sheldon Whitehouse called it “slapdash” and an “irresponsible botch” when it was his turn to speak.

“Let me tell you a political secret,” said the former presidential candidate, appealing directly to Americans who might be tuned in to watch the Senate Judiciary Committee’s hearing. “I doubt that it will be a brilliant cross-examination that’s going to change this judge’s trajectory this week. No. It is you. It is you calling Republican senators and telling them enough is enough, telling them it is personal, telling them they have their priorities wrong, so do it.”

She railed against her Republican colleagues for going ahead with the hearing amid the coronavirus pandemic and during an election year. President Donald Trump nominated Barrett last month after the death of Supreme Court Justice Ruth Bader Ginsburg, in defiance of her widely-reported final wish that the nomination would take place after the upcoming election.

“It is you voting, even when they try to do everything to stop you. It is you making your own blueprint for the future instead of crying defeat, so do it. This isn’t Donald Trump’s country. It is yours. This shouldn’t be Donald Trump’s judge. It should be yours,” she concluded.

Watch below, via CBS News:

Amy Klobuchar says the American people are the only thing that can alter Barrett's hearings: "It is you calling Republican senators and telling them enough is enough, telling them it is personal, telling them they have their priorities wrong. So do it" https://t.co/uScvfX9o80 pic.twitter.com/O2yTFqMocy