Director Eli Roth‘s “Knock Knock,” a remake of the 1977 exploitation picture “Death Game,” sometimes plays more like a comedy than like the grungy thriller that inspired it, but that’s often all to the good.

Colleen Camp, who co-starred in “Death Game,” is a producer on this version (and Roth has given Camp a funny little cameo in it), while her co-star Sondra Locke is credited as an executive producer along with the director of the original, Peter Traynor. But “Knock Knock” is very much its own movie, and Roth deserves some credit for keeping the updated narrative fairly plausible and also for moving it forward energetically.

The opening scenes of “Knock Knock” are brightly lit in the usual visual style for romantic comedy as the camera takes in the large Hollywood house of architect Evan Webber (Keanu Reeves) and his family in a voyeuristic way that makes it feel like we are spying on them. The walls are covered in narcissistic posed photos of Evan with his artist wife Karen (Ignacia Allamand) and their two picture-perfect young kids, and much of the other available space, both inside and outside of the house, is taken up by Karen’s Antoni Gaudí-inspired sculptures. We see Evan trying to have sex with Karen, but then they get interrupted by their kids, and it is established here that Evan is a good, playful father and also that he hasn’t had sex with his wife in three weeks because of scheduling conflicts.

Karen and the kids go off for the weekend and leave Evan alone for Father’s Day, when he plans to get some work done and smoke a little weed. Night falls and so does some rain, and just as Evan is about to light up he seems to hear something. He gets up and answers his door and finds two wet and sexy young girls outside, Genesis (Lorenza Izzo) and Bel (Ana de Armas), who ask him for directions to a party. They’re lost, they say, and they really need to get their bearings and maybe, you know, dry off, which of course necessitates them taking off their wet clothes…

Gentlemanly Evan offers Genesis and Bel a pair of robes and gradually begins to open up about his former life as a DJ. Reeves retains his “Whoa dude” likability here, and he plays these first scenes with the girls in a way that indicates that he is not sexually interested in them yet he is not not sexually interested in them. At age 43, Evan has been hibernating as a family man, and there is a sense in “Knock Knock” that he is waking up from one dream and falling into another one. 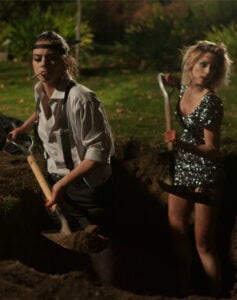 2015 is a more conservative time than 1977, and so it takes a full 40 minutes to get Evan into bed with the girls. (It only took the original 20 minutes and barely any conversation beyond Seymour Cassel‘s very weak protest, “I’m a happily married man!”) Reeves plays Evan as a simple guy who has to be carefully and obviously led to the slaughter; check out the dopily pleased look he gives Genesis and Bel when they say his wife is beautiful. The two intruders flirt with him in subtle and not-so-subtle ways — “Sex with boundaries isn’t really sex,” offers Genesis — until they finally get his pants down and yell “Happy Father’s Day!” in unison while they fellate him.

The second half of “Knock Knock” is where these libidinous chicks come home to roost at Evan’s place, knocking him out, tying him up, and tormenting him in a spirit of class grievance, gender grievance, and then in a spirit of pure gender-less nihilistic malevolence. The nastiest part of their torture of Evan is the way they vandalize and then destroy his wife’s sculptures, writing “Art Does Not Exist” on one of them.

They claim that they are both 15 years old, and gullible Evan is taken in by this and acts contrite in between bouts of rage and self-justification. What’s at play here is how sex and the sexual impulse can unleash destructive forces, and Roth enjoys conveying that destruction visually as he lets the ladies loose all over this bourgeois house.

“Knock Knock” would play entirely differently if a more patriarchal and assured male figure had been cast as Evan, but because this role is filled by the charmingly hapless and stoner-sweet Reeves, the gibes that the girls make at Evan feel particularly unfair and mean-spirited. But that’s also what makes them sting, and what gives this movie its disreputable pleasures.