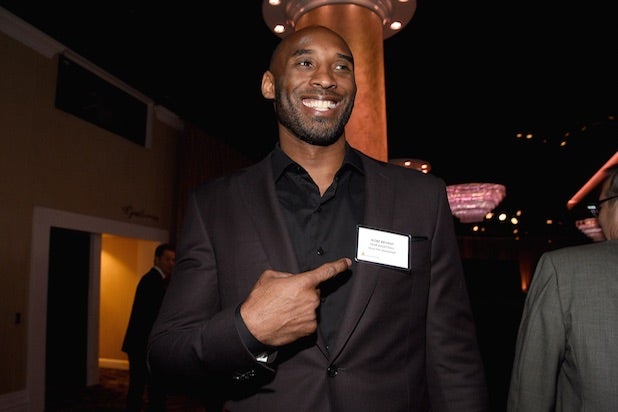 Two things conspired to give a shot of adrenaline to Monday’s Oscar Nominees Luncheon, which is normally one of the most reliable and sedate rituals of awards season.

One was the turmoil that has wracked Hollywood since the Harvey Weinstein accusations surfaced in October, which cannot go unnoticed at any awards gathering this year.

And the second was the presence of former Los Angeles Lakers star and L.A. icon Kobe Bryant, who was on the roster of nominees for his and Glen Keane’s animated short “Dear Basketball.”

The state of the industry surfaced in all the speeches, Bryant posed for by far the most selfies, and in between the Academy celebrated a usual Nominees Luncheon, with 170 of this year’s 200 nominees congregating in the International Ballroom of the Beverly Hilton Hotel to pose for a “class photo,” accept their certificates of nomination, listen to speeches from the Academy president and the producers of the Oscar show and mingle with their fellow nominees.

As always, the overall vibe was collegial and casual. But this is no ordinary awards season, which means that like almost every other gathering these past few months, the Nominees Luncheon had to face the issues — notably sexual misconduct and the underrepresentation of women in positions of authority — that have shaken Hollywood to its core in the last few months.

“The Academy is at the crossroads of tradition and change,” Academy President John Bailey said in his opening remarks. “We are witnessing the venerable Motion Picture Academy reinventing itself before our very eyes … redefined in a new era of greater awareness and responsibility in balancing gender, race, ethnicity and religion.

“I may be a 75-year-old white male,” he added, “but I’m as gratified as any of you that the fossilized bedrock of many of Hollywood’s worst abuses [is] being jackhammered into oblivion.”

Mentioning show host Jimmy Kimmel, he said, “We now so need not only his humor, but his moral compass in these trying times.” Then Oscar show co-producer Jennifer Todd opened her own remarks by saying of herself and Michael De Luca, “It is our honor to produce the show in a year the nominees are finally starting to reflect the time we live in.”

Fifty of this year’s 200 nominees are female, which ties a record for the most women ever nominated but isn’t a significantly better ratio than usual. But with four African-American acting nominees, the first female cinematography nominee ever, the first openly transgender nominee and Greta Gerwig and Jordan Peele becoming only the fifth woman and the fifth black man to be nominated for Best Director, the class of 2017 is admirably diverse by Oscar standards.

Most of that class was present on Monday for an event that was the brainchild of former Academy President Richard Kahn, launched in 1982 both to give the Academy an extra shot of publicity in the downtime between nominations and the show and to offer a celebratory event at which, unlike the Oscars, no one will go home a loser.

The seating chart enforces an egalitarian approach to the Oscars: Nominees are randomly spread out around the room, with no one sitting with anybody from their movie or anybody from their category. So Guillermo del Toro shared a table with “Dunkirk” cinematographer Hoyte van Hoytema, Christopher Nolan with Sam Rockwell, songwriter Taura Stinson with Meryl Streep, Paul Thomas Anderson with Gary Oldman, Timothée Chalamet with “The Square” director Ruben Ostlund.

Academy governor Laura Dern read off all the nominees’ names as they came to a broad riser to pose for the annual class photo, and the actress couldn’t help but give some extra oomph to every nominee from the 2017 movie she appeared in, “Star Wars: The Last Jedi.”

But she saved a different intro for one nominee. “Ladies and gentlemen, I’m a Los Angeles native,” she said about two-thirds of the way through her roll call. “Kobe Bryant, Best Animated Short, ‘Dear Basketball.'”

While Dern had missed a real opportunity to act like an NBA announcer and throw a “from Lower Merion High School!” into that introduction, Bryant nonetheless got the afternoon’s biggest round of applause as he walked to the riser — where an Academy staffer wisely sat him in a chair in the front row, so he wouldn’t tower over his fellow nominees or block those behind him.

Afterward, Bryant was the biggest star in the place as the nominees mingled. “You’re such a genius,” said “The Shape of Water” actress Sally Hawkins to him, as a line of fans awaited their turn. Not far away, “The Greatest Showman” songwriter Benj Pasek said he’d told Kobe that he’d played soccer in a Pennsylvania youth league where Bryant’s father coached.

“He said, ‘You should email me,'” said Pasek. “I thought, ‘You’re going to give me your email address?”

“The Disaster Artist” screenwriter Michael H. Weber, meanwhile, was thrilled that he’d encountered director Paul Thomas Anderson, who was toting a book by luncheon guest Daniel Ellsberg. Weber had told Anderson that his film “Boogie Nights” was the first movie he and partner Scott Neustadter had talked about when they were hired to write “The Disaster Artist,” and Anderson replied that he not only liked Weber’s film, but that he and his family regularly quoted it at home.

As the event wound down, nominees collected their official certificates of nomination. Near the exit, “The Big Sick” star and co-writer Kumail Nanjiani sat with his wife and co-writer, Emily V. Gordon, waiting to hear that their car had arrived.

“The Emmys doesn’t have anything like this,” said the “Silicon Valley” star. “There, we just show up, lose and go home.”