Without a ticket, there was no way anyone was getting near Staples Center on Monday, let alone inside where the memorial for Lakers legend Kobe Bryant and his daughter Gianna was taking place.

Los Angeles officials told non-ticketholders to avoid downtown and the house that Kobe built. But that didn’t stop them; they were looking to be a part of something.

The sidewalks surrounding Staples Center were jam-packed with people draped in purple and gold with pictures of Kobe and his daughter plastered on shirts and hoodies and jackets. Vendors set up shop, peddling everything from $10 hats and shirts to scarves, postcards and even copies of the Los Angeles Times.

Also Read: Vanessa Bryant Says Kobe and Gianna 'Couldn't Be on This Earth Without Each Other' in Heartbreaking Eulogy (Video)

It’s amazing how many things you can get in purple and gold, especially on Kobe day.

“You don’t see me on TV? I’m the n–a with the Kobe shirt on,” said one fan talking on phone while walking down the street across from the arena. “Nah, we aren’t going inside, they aren’t letting anymore people in there. We just wanted to come hang out downtown.” 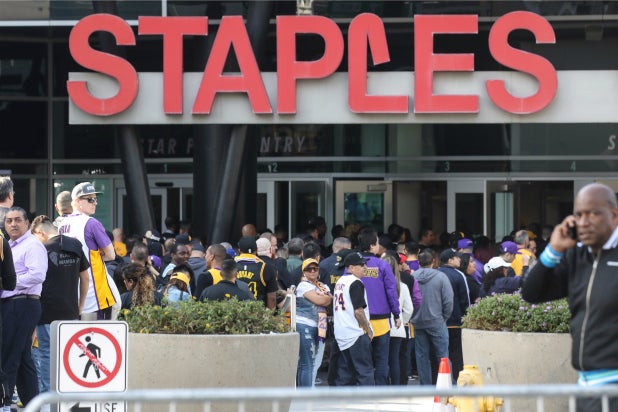 Folks just wanted to be downtown, be part of the community, take in the awe that Kobe engendered. And they came downtown to show out. How do you stand out when everyone’s donning purple and gold? Toss on a massive chain dedicated to Kobe for good measure, maybe hop in your supped up sports car painted glossy purple or gold, or yellow.

Why not take it one step further; paint a mural on the car. Rev the engine, make a scene. Get people to stop and stare; let them take photos with the car. Do it for Kobe, chant “Kobe, Kobe.”

Kobe, along with his daughter Gianna were killed in helicopter crash on Jan. 26 with seven others. 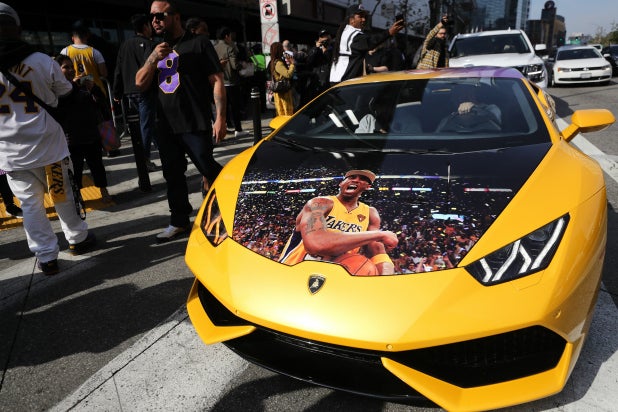 Justin Bina, a personal injury attorney in Beverly Hills went down to Staples Center, with members of his law firm Titan Law, not to attend the memorial, but simply hand out free Kobe-inspired towels and lighters (with a side of a little promotion for the firm as well).

Growing up in L.A., Bina said he’s been a Lakers fan dating back to Magic Johnson’s Showtime Lakers, but that Kobe was the guy who really became an icon for the city.

“It’s always felt like there’s a little bit of Kobe in everybody. When we were growing up, we’d summon the inner Kobe to get through hard times,” Bina said. “When we found out the tragic news, losing a great like him and his daughter, we thought how can we give back to the community, still show our love. I figured what better way to get my law firm behind this, pass out free schwag and show people some love.”

Kobe played 20 seasons for the Lakers, beginning in 1996 when he became the first guard to enter the NBA straight from high school. He won five titles, including three in a row with Shaquille O’Neal from 2000-2002. He won league MVP in 2008, two NBA Finals MVPs, and led the league in scoring twice, including in 2006, when he dropped 81 points in a January game against the Toronto Raptors.

After retiring in 2016, he turned his focus toward entertainment — fitting for a guy who spent most of his adult life in Los Angeles. He won an Oscar in 2018 for his animated short film “Dear Basketball.” He also opened the Mamba Sports Academy and helped coach Gianna’s basketball team.

Kobe’s death sent a shock wave through not just L.A., but the world, sports fan or not. 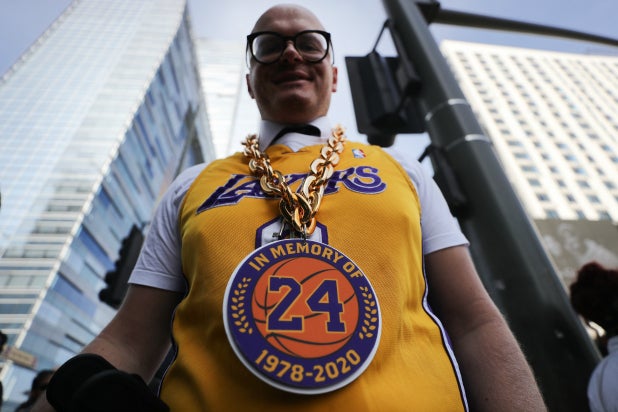 Kenya Clay grew up down the street from The Forum arena in Inglewood, Calif. where the Lakers played during Kobe’s first three years in the NBA. Clay was one of the hundreds of people who flocked to Staples Center the day Kobe died to mourn.

“Everyone was just stuck,” she said. “For me, I’m from L.A. so this for us is a big hit. To feel the synergy from everyone that’s down here, it’s beautiful. It’s bitter but it’s so beautiful. We just wanted to be a part of that.”

Also Read: Jimmy Kimmel Delivers Tearful Tribute to Kobe Bryant: 'All We Can Do Is Be Grateful for the Time We Had' (Video)

Clay, who showed up to Staples Center on Monday with a friend originally from Pennsylvania, didn’t have a ticket for the memorial. They were both decked out in Kobe shirts and Lakers attire and just wanted be a part of the moment, to pay respect to the Mamba.

“It’s surreal because in L.A. we don’t have a lot of things that bring us together like this,” Clay said. “You see so many walks of life out here it’s crazy, different cultures and ethnicities, kids and parents, families, old, young. His impact touched so many people and it’s just beautiful.