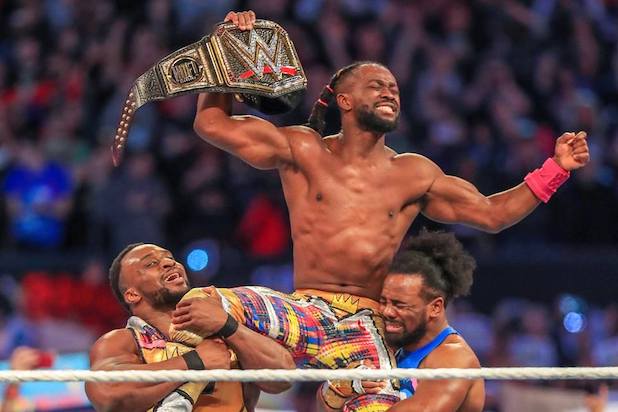 Aaaaawwwww San Antonio, don’t you dare be sour! And probably don’t you dare eat those pancakes that WWE Champion Kofi Kingston and his teammates in The New Day, Big E and Xavier Woods, toss into the crowd tonight during their “SmackDown Live” entrance.

“You can do with them as you please, but understand that, not only do some of them come out of my championship belt, some of them also come out from Big E’s singlet,” Kingston told TheWrap about their breakfast-all-day offering. “So do whatever you want with that information.”

Yeah, the fellas in The New Day march (and unicorn stampede) to the beat of their own drum — or at least, to Woods’ trombone. It’s all part of their charm, which appeals to fans of all ages.

Another thing Kingston does differently than other wrestlers starts at the locker. Kingston, whose real name is Kofi Nahaje Sarkodie-Mensah, wears sneakers in the ring, which only makes sense giving his skillset and the evolution of professional wrestling itself.

“Everything that I’ve done athletically has always been in sneakers my entire life,” Kingston told us.

Except when he wasn’t allowed.

When Kofi was in Deep South Wrestling, head coach Bill DeMott required all of his students to practice in boots — the traditional wrestling footwear choice.

“It instantly cut my athleticism down by 60%. I couldn’t move, it was all clunky, I didn’t feel like I had traction or grip on the ground,” Kingston said. “Luckily, on the main roster now, I’ve been kinda able to do what I want to do, no one’s said anything to me — yet.”

See what kicks Kingston is wearing tonight on USA Network’s “SmackDown Live,” which starts at 8/7c and concludes two hours later. Oh, and BYOB (Butter) for those flapjacks, San Antone.