What’s a Krampus, you ask? In certain European Christmas traditions, it’s a freaky folkloric beast of pagan origin, sporting horns, hooves, and chains, and pouncing on children of the not-nice type as a kind of holiday penance. (Okay, mostly Austria and Germany – are you surprised?)

Ah, but what’s a “Krampus,” then? Following Hollywood tradition, it’s an optimistic stab at capitalizing on a creepy-funny ancient horror for a little yuletide money-harvesting. Though not exactly a punishment, director Michael Dougherty’s tongue-in-cheek monster movie is hardly a celebration, either, despite initial promise that we’d be getting a niftier-than-usual package of subversive comedy and chills to shake up the usual holiday-movie sameness.

The movie, written by Dougherty, Todd Casey and Zach Shields, bakes together a couple of genres — the fractured family confab, the haunted house movie, and the mythical creature showdown. It starts with beleaguered parents Tom (Adam Scott) and Sarah (Toni Collette) breaking up a department store fight between their boy Max (Emjay Anthony) and another kid. Max, a Santa-believing soul who takes the holiday seriously enough to throw punches when it’s disparaged, has grown increasingly disillusioned with the draining Christmas spirit around him.

His workaholic dad and lonely mom are growing apart, his snarky older sister Beth (Stefania LaVie Owen) can’t wait to escape to her boyfriend’s place, and then there’s the eye-rolling intolerance for their visiting extended family (who are nevertheless presented as obnoxious): a gun nut uncle (Dave Koechner), his mousy wife (Alison Tolman), their weird kids, and bigoted, unhelpful Aunt Dorothy (Conchata Ferrell).

Only Max’s silent, stern-faced, German-speaking grandma (Krista Stadler) grasps his concern, but it doesn’t stop him from tearing up his mocked wish-list letter for Santa and tossing it out the window. That’s all the invitation a watchful, otherworldly menace itemizing the naughty and disgruntled needs, apparently. 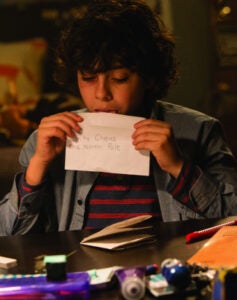 First a blizzard hits, then the power goes, and when Beth ventures into the snowstorm, she glimpses in the distance the terrifying figure of a massive, raggedy creature leaping from rooftop to rooftop. Back home, creepy snowmen start appearing in the yard, and after one of the visiting cousins gets sucked up the chimney, the hemmed-in Engel clan starts to realize something has it in for them.

Until then, “Krampus” has done a pretty good job setting up seasonal malevolence (a funny opening credit sequence depicting crazed, venal department store shoppers), the Engels’ housebound dysfunction, and the darkness in store. Scott’s well-honed comic timing, the easy sympathy Collette and “Chef” breakout kid Anthony elicit, and Stadler’s I-know-something-you-don’t looks are early pluses, and that first Krampus sighting feels like something out of Peter Jackson‘s early, fleet-of-foot horror romps. (That might be due to the fact that the New Zealand-shot production used Jackson’s Weta effects houses, and Jackson himself is thanked in the credits.) There’s even a nicely turned animated interlude when grandma – or the German “omi,” as Max’s family calls her – recounts the history of the Krampus as it relates to her dark, fateful childhood.

The rest of “Krampus,” however, which turns into the PG-13 version of a body count exercise, falls into the trap a lot of these movies do: The siege mentality takes over, characterization goes away, noises and screams dominate, and the photography and editing become unnecessarily jittery and jagged. It’s one more loud war movie.

The shame is that there’s wily, “Gremlins”-ish comic invention in the Krampus turning the innocent icons of Christmas — gingerbread men, dolls and toys — into toothy, smeary, child-munching armies of evil. Also, the puppetry on display, which extends to the Krampus itself and its frozen, wrinkled, satanic mask, is wonderful, when you can see it.

But too often, Dougherty, who also made the 2007 Halloween anthology film “Trick ‘r Treat,” succumbs to standard-issue action-comedy filmmaking that saps the movie of any truly impish fun or nasty scares. The legend of the Krampus, often referred to as the shadow of St. Nicholas, is a fertile one indeed, but this “Krampus” – a missed opportunity for anti-saccharine counter programming — isn’t likely to create many new believers.