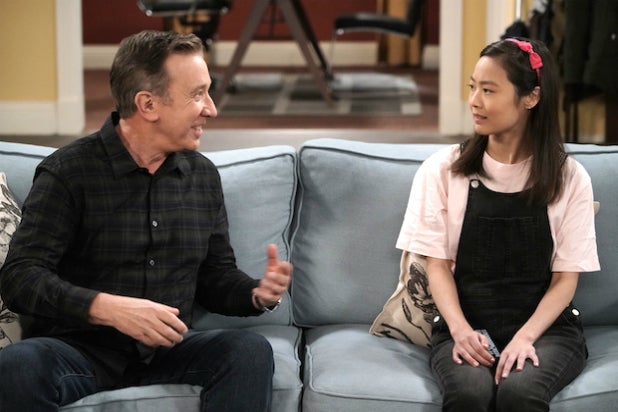 Take your coat off, stay awhile. Krista Marie Yu has been promoted to a series regular on Tim Allen’s “Last Man Standing.”

Yu’s character, a foreign exchange student from Hong Kong named Jen, was introduced to the Baxters in a November episode. At the time, Jen met with Mike (Allen) and Vanessa (Nancy Travis) to see if she’d be a good fit to stay in their Colorado family home. That was a guest spot for Yu (“Dr. Ken”).

She must have felt right at home, as Jen moved in last Friday. Writers on the former ABC sitcom must be giddy with the possibilities.

It wasn’t this season’s only recasting, as the time between ABC’s cancellation and Fox’s pickup meant actor availabilities had changed.

Previously, Jet Jurgensmeyer (new Boyd) and Molly McCook (new Mandy) replaced Flynn Morrison and Molly Ephraim for this inaugural season on Fox. Mandy is one of the Baxters’ daughters and has appeared (in one form or another) in every episode of the sitcom. Boyd, a grandson of Mike and Vanessa, has shown up in half the episodes.