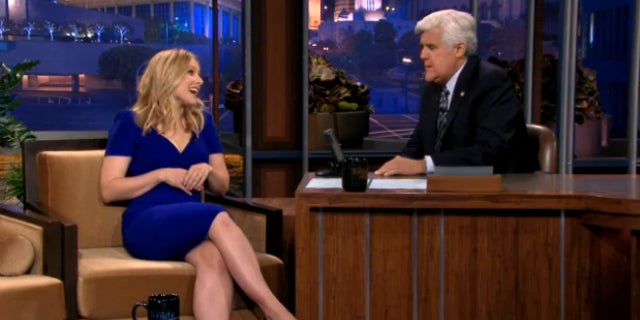 Editor's note: For the record: The "Tonight Show" episode featuring Kristen Chenowith originally aired on 7/29/13. It was an encore presentation that ran 8/21/13. TheWrap regrets the error.

Kristen Bell was a guest on the "Tonight Show" Wednesday where she mocked the mocking bird who has been mocking her for years.

Or as she put it to host Jay Leno, "I am being tortured by a devil bird."

"It's their mating season, and I have a bachelor in my tree that starts squawking around midnight and wraps it up around 7 a.m."

I'm always yelling up at the tree, "Nobody wants to date you!" Bell, who recently had a baby, continued.

"I think this is called postpartum depression," Leno quipped.

So far, chucking empty water bottles into the tree hasn't worked, nor has shaking the branches, tarping the tree — even Nerf pellet guns have done nothing. The bird returns year after year, "mocking" the annoying sounds from the neighborhood, like car alarms.

But this summer, Bell's got a Super Soaker — and that sucker's got a 35-foot range.

"I think we're going to wrap it up this year," Bell confidently concluded.