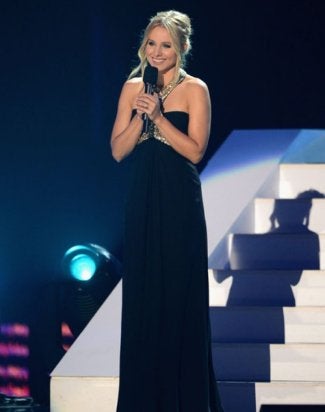 Country music has really embraced Kristen Bell, and they’re giving her a vote of confidence. For the past three years, Bell has acted as co-host for the “CMT Music Awards.” In 2012, she co-hosted with Toby Keith. Last year, it was Jason Aldean. Now, she’s ready to fly solo.

“After two years of duets with amazing partners, I’m really excited for my first solo effort,” said Bell in a statement. “I love that the country community has welcomed me so warmly and I can’t wait to head back to Nashville for what’s sure to be another amazing show this year.”

The “Frozen” star, who also stars in “House of Lies” and recently reprised her cult role as “Veronica Mars” for the film, broke the news Tuesday morning via Twitter.

Great news! I am heading to Nashville again to host the #CMTawards! Check it out Wed, June 4 at 8/7c on CMT! I’m so excited!!