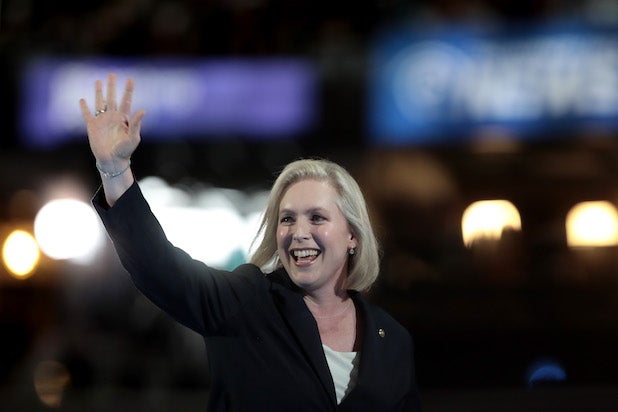 New York Senator Kirsten Gillibrand, who took over Hillary Clinton’s seat in 2009, had Twitter in a tizzy after dropping not one but two F-bombs at President Trump and Washington during a fiery speech Friday.

“If we are not helping people, we should go the f— home,” she said while addressing the Personal Democracy Forum in New York City, according to Steve Peoples of the Associated Press.

“If we are not helping people, we should go the fuck home," Sen. Kirsten Gillibrand tells audience of Dem Party at Personal Democracy Forum.

Meanwhile, Deadspin’s Hamilton Nolan grabbed another one of her colorful quotes: “Has he kept his promises? No. F— no.”

Kirsten Gillibrand speaking at NYU just now on Trump: "Has he kept his promises? No. Fuck no."

Gellibrand’s fondness for four-letter words had Twitterverse both cheering and jeering.

Another tweeted: “I’m with f—ing @SenGillibrand.”

This isn’t the first time Gillibrand has flirted with salty language. A New York Magazine interview with the Senator in April was laced with curse words.

Gillibrand is a rising star within the Democratic Party, spurring chatter that she could be a candidate for president in 2020. But the junior Senator has downplayed that talk in May.

“I’m focused entirely on running for Senate, so yes, I’m ruling it out,” she said of running for president.

Tell it! Get nasty…that's the way we all feel!!! @SenGillibrand https://t.co/jHb5s8RjLn

I ❤ @PodSaveAmerica and @SenGillibrand and the F word. MAKE THIS HAPPEN.

@SenGillibrand Way to keep it classy. F bombs are a SURE way to get votes (at least, that's what appears to be the new belief in your party)

How do I do this? I have no f***ing clue. (Disgraceful Democratic Senator Kirsten Gillibrand of NY during speech with young audience)