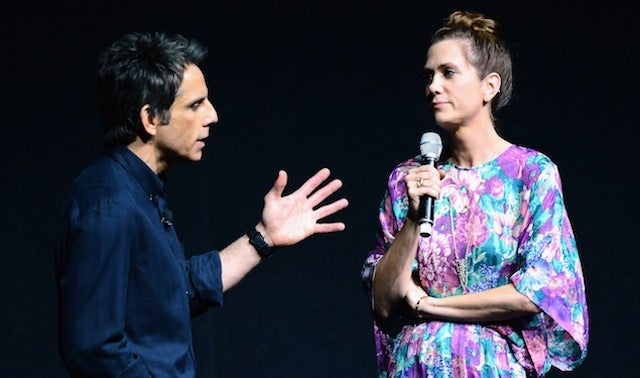 Kristen Wiig, one of Hollywood's most sought-after comedy writer-actors, revealed what may be her next ambition on Thursday:  to direct.

At a press conference for the movie “The Secret Life of Walter Mitty,” about a man (played by Ben Stiller) who struggles to chase his dreams, Wiig said Stiller had inspired and taught her about getting behind the camera.

“It was very inspiring for me to watch Ben [Stiller] directing and acting in this movie because I do hope to maybe direct something,” Wiig said.

In addition to directing, Stiller produced and stars in “Mitty,” the second film adaptation of James Thurber’s short story. The talented Wiig, who last year left the cast of "Saturday Night Live," wrote and produced the blockbuster comedy hit, "Bridesmaids" in 2011. And she has a handful of other projects in pre- or post-production, including filming the new"Anchorman" comedy and the "Despicable Me" sequel. (Check out her PowerGrid page here)

Wiig praised Stiller for behaving so calmly despite wearing all those different hats.

“As an actor you never want to see a director freaking out about anything and we felt very safe and taken care of,” Wiig said. "He knows exactly what he wants."

The film is a drama and fantasy, marking a shift for Stiller and Wiig. As a director, Stiller has succeeded with comedies like "Zoolander" and "Tropic Thunder."

When the two were on stage at CinemaCon to present a clip, Stiller said the film was impossible to describe, using contradictory words like epic, small, funny  and serious. In a subsequent press conference, he explained that the very idea of making it frightened him.

“We were looking at the movie not as just a comedy, with different critiera about how to connect with an audience and tell a story," he told reporters on Thursday.

Wiig wasn't buying it. She described the shoot, much of which took place in Iceland, as a "free class" in directing.

“Maybe you should go to a different school,” Stiller quipped.