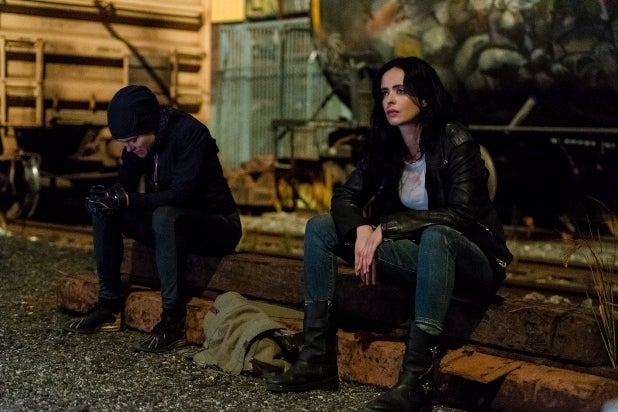 (Warning: The following story contains spoilers about the entirety of “Jessica Jones” season 3)

“Jessica Jones,” which debuted its third and final season on Netflix Friday, gets to do something that no other Marvel/Netflix series got to: Actually craft an ending.

“We didn’t get canceled in the middle of the night as a shock,” star Krysten Ritter told TheWrap. “This show is deeply personal and has been a psychological character study of Jessica Jones. We’ve spent a lot of time with her and I think that this length of storytelling is perfect and fitting.”

By now, it’s known that Netflix pulled the plug on the four-year partnership with Marvel that began with 2015’s “Daredevil” (more on that here), but Ritter said that they were lucky enough to know that their show wasn’t going to continue past its third season. Even before the show began production, it was known that Melissa Rosenberg would be leaving as showrunner for a new production deal with Warner Bros. TV.

“Melissa and I worked very carefully and closely to make sure that we’re completing her journey in a way that feels very Jessica,” Ritter continued. “A little ambiguous, not perfect, not tied up in a bow, but hopeful and always about those baby steps of emotional growth.”

So what do those “baby steps” represent? Throughout the first two seasons — and her time on the crossover “The Defenders” — Jessica has questioned whether or not she really is a superhero, despite her superhuman abilities.

The third season sees Jessica come face to face with Gregory Salinger (Jeremy Bobb), who is known in Marvel comics as The Foolkiller. Throughout the season, he says Jessica is no hero and that she’s basically cheating because she has special superhuman abilities. That “am I a hero or not” has been the backbone of Jessica Jones’ character during the series’ run.

“Each season it’s been tiny baby steps of watching Jessica try to be a hero, and hate herself a little bit less. In the final moments, it’s sort of like Jessica realizing that maybe she is a hero and maybe she’s been wrong this whole time,” Ritter continued. ” That feels really beautiful to me.”

This season also provided a first for Ritter: She made her directorial debut during the second episode, which tells Trish Walker’s (Rachael Taylor) own origin story into becoming the vigilante Hellcat (though she doesn’t use that moniker in the series). As Ritter puts it: “I also know what it’s like to originate a superhero.”

The episode essentially swaps in Walker’s internal monologue for Ritter’s and tells the same events of the first episode, but from her vantage point. “I was so excited to get that episode because that was the episode to get,” Ritter says. “It’s a departure from the format that we follow every episode. I got to really put my creative stamp on it, get inside the head of a different character and tell her origin story.”

Also Read: Krysten Ritter Responds to 'Jessica Jones' Cancellation: 'I Love These People to the Moon and Back

Though “Jessica Jones” was the only Marvel-Netflix series to get a proper ending, the show does attempt to put at least little code in there for another Defender.

In the final episode of the series, Jessica’s former beau and fellow Defender Luke Cage (Mike Colter) makes a final surprise appearance to give her some sagely advice about whether or not she should hunt down Trish, who has gone off the deep end. Though “Luke Cage” is one of the Marvel TV series left hanging by Netflix’s decision to scrap the partnership, Colter’s appearance serves as a bookend of sorts, since he first debuted during the first season of “Jessica Jones” before getting his own series.

“We take our fans and our audience very seriously and we hope that they feel as we do, which is at peace and satisfied and proud of what we’ve done,” said Ritter.