Directed by Jon and Andrew Erwin, the film stars Zachary Levi as Kurt Warner, the quarterback who led the St. Louis Rams to victory in Super Bowl XXXIV and was inducted into the Pro Football Hall of Fame in 2017. The film follows his rise from a grocery store worker to a two-time league MVP and the support he got from his family, friends, coaches and his wife, Brenda (Anna Paquin), along the way. 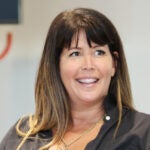 “This movie perfectly aligns with the emotions of the holiday season: The power of faith. A drive to bring out the best in all of us. The strength of family. And of course, the height of the NFL championship season. When you take all of that together, the perfect release date for this movie is Christmas day, and that’s where we have decided to date it,” Joe Drake, Chair of Lionsgate’s Motion Picture Group during the presentation, said.

The film is being released as part of a long-term partnership between Lionsgate and Kingdom Story Company, a production studio created by the Erwins to produce films for faith-based moviegoers as well as spiritual and inspirational films for general audiences. On the weekend prior to the nationwide shutdown of movie theaters in March 2020, the Erwins released Kingdom’s debut feature, “I Still Believe,” which opened to $9.1 million at the box office.

Lionsgate and Kingdom are also planning to release the Christian rock music documentary “The Jesus Music” in October and “The Unbreakable Boy,” a family film about an autistic boy with a rare brittle-bone condition, in March.