The focus moved to Twitter at the Fortune Brainstorm Tech Conference as Ashton Kutcher, who has nearly 3 million followers on the social network, extolled the many uses of the site — from philanthropic projects to political campaigns to promoting a movie. 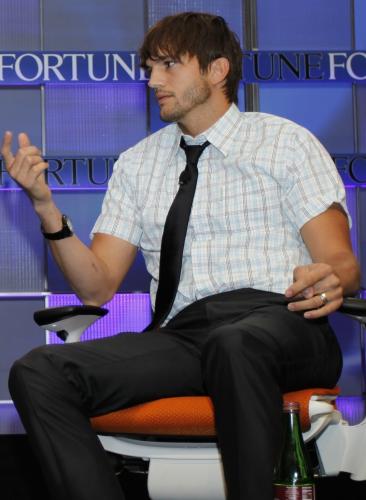 Still, Kutcher did also manage to go beyond the barrage of Twitter questions to note how the site embodies a far greater trend — the emergence of digital media and the imminent dominance of the consumer as a content creator.

“We’re turning media back over to the consumers of the media,” he said. “They are becoming the creators of the media and the editors of the media. Through that collaboration that is existing on the web, that has and will forever change media."

Kutcher has tried to seize on this trend with his company, Katalyst Media, which has divisions for TV, feature film and digital content. Though technically separate divisions, Kutcher emphasizes the overlap between them and tries to find ways to bring them together.

Echoing IAC Chairman Barry Diller, who spoke earlier in the morning, Kutcher said that this convergence was furthering the decline of traditional advertising — or in the case of the web, display advertising.

“People who have grown up on the internet have trained themselves to not really see it, remember it or retain it,” he said.

Others suffering from the transition to digital include Kutcher and his colleagues — the movie stars. “You can make good content for $3 or $5,000 and not pay movie stars,” he said. “They are not going to be able to demand the fees that they get and will become less and less relevant.”

Kutcher, whose acting career has suffered of late, found increasing relevance through Twitter, where he has more followers than CNN.

Tim Armstrong: AOL and premium content can find the way ahead