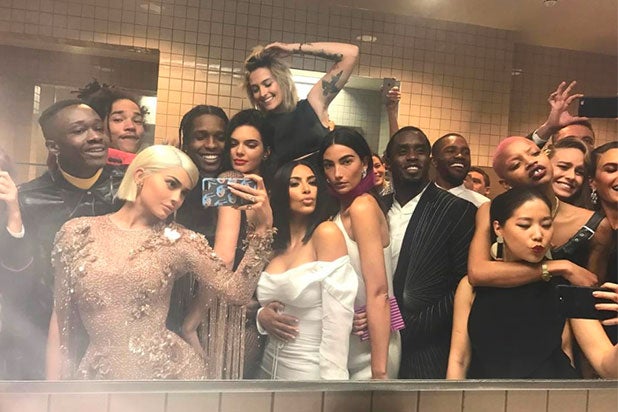 Larson later reposted Jenner’s major selfie, joking about how a trip to the bathroom made her famous. Of course, other celebrities also shared the photo on various other platforms later, including Jenner’s sister Kim Kardashian, Michelle Monaghan, and shoe designer Tabitha Simmons.

Also Read: What Is the Met Gala?

I needed to go the bathroom and ended up famous https://t.co/j1zE9VE9ZW

According to E! Online, the “no social media” policy was implemented in 2015 but isn’t taken as seriously two years later. Sources told the publication that when the policy was first introduced it was “solely to do with guests’ security and enjoyment of the event,” not to prohibit them from documenting the annual night.

Halle Berry and Nick Jonas, for example, kept fans up to date on their night by posting Instagram stories, while Jackson shared a Snapchat photo of herself in the bathroom with Bella Hadid, Lara Stone and Ruby Rose.

In 2015, Kendall Jenner took a bathroom selfie which featured the likes of Emily Ratajkowski, Zoe Kravitz and Cara Delevingne.

The annual Costume Institute exhibit is curated by Andrew Bolton, and watched over with an iron clutch by Vogue editor and Conde Nast creative director Anna Wintour. This year’s theme was “Rei Kawakubo/Comme des Garçons: Art of the In-Between,” a celebration of the avant-garde designer.