Leave it to Kylie Jenner to make Snap’s week even worse.

Shares of Snapchat’s parent company tanked 6 percent on Thursday, a day after the famous person complained on Twitter about the app’s widely-loathed redesign.

“Sooo does anyone else not open Snapchat anymore? Or is it just me… ugh this is so sad,” tweeted Jenner.

sooo does anyone else not open Snapchat anymore? Or is it just me… ugh this is so sad.

Jenner added she’s still a fan of the app in a followup tweet, however, saying its her “first love.”

Snapchat’s updated look aimed to make the app “easier to use,” in the words of CEO Evan Spiegel. But Jenner isn’t the only one confused by the makeover. More than one million people signed a Change.org petition for Snapchat to undo its redesign. Snapchat responded on Wednesday, saying it “appreciated” the sentiment — yet it wasn’t going to be changing back anytime soon.

Pivotal Research Group analyst Brian Wieser told TheWrap it was “reasonable” to think Jenner’s tweet sent some investors fleeing. “It’s a stock in a nascent sector, where effectively a soft breeze can cause a stock like this to move,” said Wieser.

Jenner’s tweet compounded an already difficult week for Snap. Citi Group downgraded the stock on Tuesday, pointing to the poor response to its redesign. And an SEC filing on Thursday showed Spiegel received a $638 million payout in 2017 — which stood out for a company that lost more than $700 million for the year. Coupled with the stock entering a lull following its better-than-expected Q4 earnings report, the perfect storm for a dip was in place.

Ross Gerber, President and CEO of Gerber Kawasaki Wealth and Investment Management, told TheWrap Jenner’s tweet was just the “icing on the cake” for Snap’s slide. More importantly, her response hinted Snap’s attempt to win back influencers from Instagram isn’t going according to plan.

“She represents the most important demographic, and she is huge,” said Gerber. “Older people will never adopt Snapchat. We’re done with social media.  So alienating their core audience is stupid. The redesign should be a choice and users should be able to keep the version they like. [Spiegel] is tone deaf.”

Snap closed above $20 a share on Friday, but after its 6 percent slide on Thursday, was hovering near $17.50 a share. 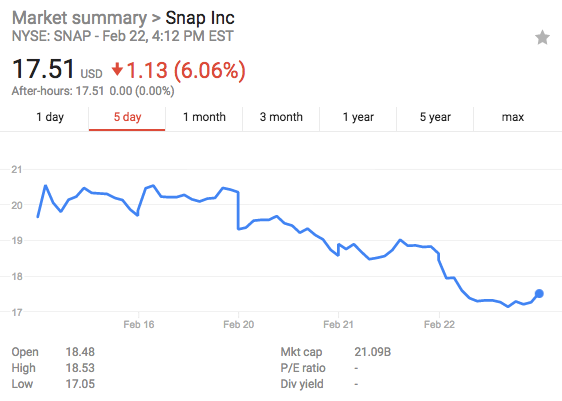 Shares of Snap dropped 6 percent on Thursday (via Google)

Coincidentally, Jenner’s mug, featured in a Daily Mail post, was the first thing greeting Snapchatters when they opened Discover on Thursday afternoon.