The throwback fashion statement — and we’ll call it what it was, tacky — wasn’t her first questionable choice or behavior that has drawn condemnation. But the utter surprise for those expecting a more professional sartorial demeanor — even from her — remained.

And it came at a crossroads, as congressional Democrats closed in on a deal for a domestic spending package. It’s something Sinema had previously stood in the way of, provoking anger among many of her colleagues in part because, in addition to trolling instead of engaging, she used it as part of an apparent attention-getting ploy. 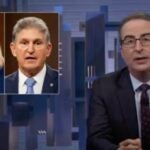 Sinema’s strategy continued. But it injected denim into a space that, though desecrated in the Jan. 6 insurrection, has rarely seen such garb — even around Halloween.

It did not go without notice.

See more of the reaction below.