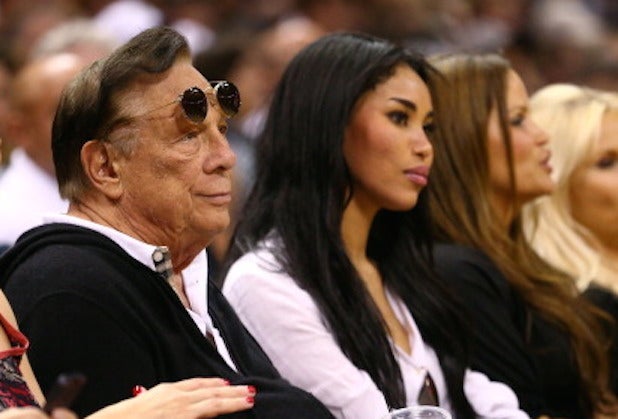 The LA Clippers owner and Los Angeles land baron has long been separated from his wife, which has provided him with the freedom to date and allegedly objectify many younger women. Currently, he’s dating a woman named V. Stiviano, but things have been rocky between the two as of late — largely because Sterling disapproves of the photos she puts on Instagram.

The problem, it appears, is that Stiviano — who is half-Mexican and half-black — smiles alongside African American pals, including Lakers legend Magic Johnson. Sterling, the notoriously cheap owner of LA’s historically ignored team, does not appreciate his girlfriend being friends with Magic, or minorities in general.

In a shocking conversation that was caught on tape and posted by TMZ, Sterling assaults Stiviano’s associations again and again, explaining that “culture” should preclude her from making public her friendship with minorities.

“It bothers me a lot that you want to broadcast that you’re associating with black people. Do you have to?” Sterling says at one point. Later he adds, as if being conciliatory, “You can sleep with [black people]. You can bring them in, you can do whatever you want.  The little I ask you is not to promote it on that … and not to bring them to my games.”

The NBA issued a statement to ESPN about the matter, saying they were investigating the tape:

“We are in the process of conducting a full investigation into the audio recording obtained by TMZ. The remarks heard on the recording are disturbing and offensive, but at this time we have no further information.”

Magic Johnson responded on Twitter, saying, “TMZ reported this morning that Clippers owner Donald Sterling doesn’t want me or other African-Americans to come to Clippers games… and I will never go to a Clippers game again as long as Donald Sterling is the owner…. I feel sorry for my friends Coach Doc Rivers and Chris Paul that they have to work for a man that feels that way about African Americans…. LA Clippers owner Donald Sterling’s comments about African Americans are a black eye for the NBA.”

The tape has a whole lot more, if you care to listen below: