Location movie shoots in L.A. County tumbled 4.5 percent in 2015, and the numbers would have been worse if the effects of California’s expanded tax incentive plan weren’t starting to kick in.

A number of tax-credit TV projects have already started shooting however, and that helped that sector post a 9.5 percent gain, leaving overall production in the L.A. region up just 1.5 percent from 2014, according figures released Tuesday by FilmLA.

“The network TV shows have to shoot in July and August to be ready for fall, so we see the boost there immediately,” Amy Lemisch, head of the California Film Commission told TheWrap on Tuesday. “Features have a longer lag time, and most applied in July and will use the full six-month period to prepare for shooting so we don’t see the same sort of bump.”

The figures released Tuesday (see chart) are based on permitted days of location shoots. The numbers don’t include movie and TV filming on sound stages. Among those projects are HBO’s “Veep” and FX’s “American Horror Story,” both of which relocated from other states to cash in on the state’s upgraded incentives.

“Horror Story” was among the biggest beneficiaries of the program, with $33 million in covered expenses. The Disney feature film “Overnight” was another, with $52 million offset by the program.

Reality TV shoots fell by 8 percent, but rising to drive the year’s slight overall gain were scripted TV dramas (19.3 percent), sitcoms (100 percent), pilots (13.9 percent) and web-based TV projects (28 percent). TV dramas are among the most desirable shows for the area to land, since the benefits of the typically high-end productions can extend for years. 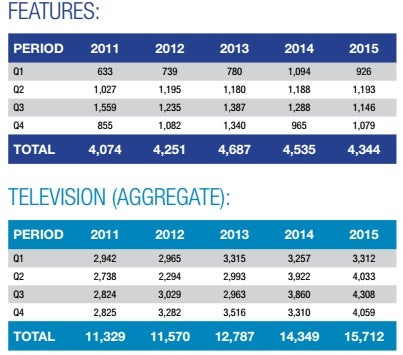 “We’re seeing steady growth in the categories directly affected by the program, like scripted one-hour TV shows, and we expect to see the same sort of impact on indie and feature films next year,” Lemisch said. “Most producers tell us their first choice is to stay here in California, but they have to have the incentives.”

The movie shoot numbers would have been worse, but five projects that received state tax funds began filming between October and December: “CHiPs” and “The Conjuring 2” from Warner Bros., EuropaCorp’s “The Sentence” and “Rebirth” from Campfire Films.

Also Read: California Regains Status as No. 1 in Movie Production

The impact of the state’s tax credit boost is being watched carefully by proponents of the incentives as well as foes, who feel the money would be better used to help with education or pay off deficits. It’s a battle being fought across the country, with both sides rolling out statistics and surveys to make their cases.

Several states cut or eliminated the programs in 2015, including New Jersey, Michigan and Louisiana, which had been a major player in recent years. At the same time a few large states upped the ante, including Georgia, New York and California, which under Gov. Jerry Brown hiked its annual allotment from $100 million to $330 million for the next five years in the summer of 2014.

The conservative Tax Foundation says they “bring with them a myriad of problems,” including a lack of permanent jobs and overly rosy estimates of their economic benefits.

“Every independent study that has looked at film tax credits shows that they don’t pay for themselves,” said Joseph Henchman, the Tax Foundation’s vice president for state projects.

The Motion Picture Association of America, the lobbying arm of the movie industry, counters that the incentives help create thousands of jobs and generate billions of dollars in economic activity in the states.

The national debate wasn’t the biggest issue for the film commission’s Lemisch.

“For California, it doesn’t matter if one or two or five states decide this isn’t the economic development plan for them, our competition is global and comes from London, Vancouver, Toronto and others.”