According to a new report, filming in Los Angeles County decreased by 7.6% in November, marking the first dip since pandemic filming activity resumed in mid-June.

In the report released Tuesday by FilmLA, the partner film office for the City and County of Los Angeles and other local jurisdictions, analysts attributed the slight decline to factors including the presidential election, the Thanksgiving holiday and ongoing pandemic concerns.

“Now I think we are probably plateaued for a while,” FilmLA president Paul Audley told TheWrap. “I don’t see us having a major increase going forward until a good part of the population has a vaccination or the numbers really drop, one or the other.”

Though Audley said some production companies plan to continue shooting during the holidays, he does not expect to see significantly increased filming activity in December. He added that the difficulties of maintaining proper distancing and sanitation continue to slow down production.

Also Read: 'The Bold and the Beautiful' Will Use Blow-Up Dolls for Sex Scenes

The new FilmLA report is the organization’s sixth update on the production restart process since the filming shutdown in mid-March. Filming was allowed to resume in mid-June. Audley said there have been no city or state directives to shut down production since then, but said it took film and television production until late September or early October to ramp up again. Between mid-June and late September, most production was in the area of advertising, including still photography and commercials.

“The unions, guilds and studios had not yet come to agreement as to how to deal with film and television on the sets” when filming was allowed to resume in June, Audley explained. 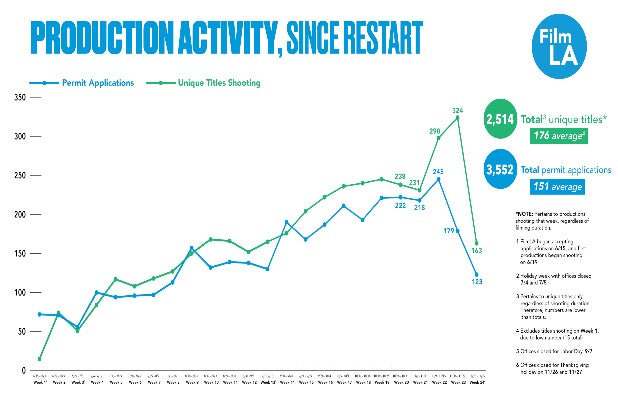 Audley confirmed that FilmLA has seen strong increases in outdoor and location shooting versus indoor shooting during the pandemic period. And while local and state protocols allowing filming to continue have received backlash from restaurant owners, theater owners and other businesses that have faced pandemic closures, Audley explained that the reasoning has to do with the difference between closed filming sets and activities that allow public access.

“I think the first thing I want to express is real empathy for every business in the country because we recognize the extreme stress that all business is under, including my own — FilmLA is not a government agency and more than a third of my employees have been furloughed,” Audley said. “The difference is not in lobbying and clout, the difference is whether you have public access or not. [A filming unit] is an isolated group that has been tested and retested. I’m not sure it’s the clout as much as the physical aspect of how the work is being done.”