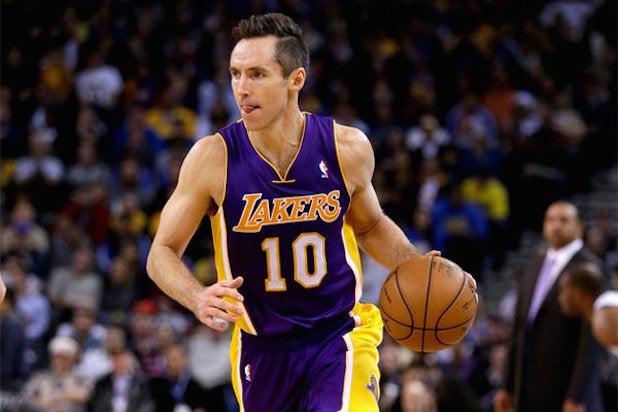 Los Angeles Lakers guard Steve Nash announced his official retirement from the NBA on Saturday via a letter published on Derek Jeter’s website The Player’s Tribune.

Nash won back-to-back MVP awards in 2005 and 2006 and played in eight All Star Games. He finished his career with the third-most assists in NBA history behind John Stockton and Jason Kidd. He also retires as the most accurate free throw shooter in NBA history.

After signing a three-year, $28 million deal with the Lakers in 2012, Nash broke a bone in his left leg and was never quite the same player afterwards. While Nash hasn’t played yet due to injuries, he’s slated to be paid $9.7 million this season, his 19th in the league.

“When I signed with the Lakers, I had big dreams of lifting the fans up and lighting this city on fire. I turned down more lucrative offers to come to L.A. because I wanted to be in the “fire,” and play for high risk and high reward in my last NBA chapter. In my second game here, I broke my leg and nothing was the same,” wrote Nash.

Also Read: Steve Nash: Moving on to Movies After the Lakers?

“Last spring, when I returned to the court, I was given a standing ovation at Staples Center. It was a dark time in my career and that gesture will be one of my best memories. There’s been a lot of negativity online, but in my nearly three years in L.A., I’ve never met anyone who didn’t show me anything but love and support for my efforts. There’s a lot of class in Lakerland, and the organization and staff have given me unwavering support.”

In 2010, Nash co-directed a short film titled “Into the Wind” for ESPN’s acclaimed “30-for-30” series. The film chronicled Terry Fox’s 1980 run across Canada despite having his right leg amputated six inches above the knee as a result of bone cancer.

Nash has not announced a follow-up project, but he’ll have plenty of time to focus on filmmaking now that he has announced his official retirement.

“I will likely never play basketball again. It’s bittersweet. I already miss the game deeply, but I’m also really excited to learn to do something else. This letter is for anyone who’s taken note of my career. At the heart of this letter, I’m speaking to kids everywhere who have no idea what the future holds or how to take charge of their place in it. When I think of my career, I can’t help but think of the kid with his ball, falling in love. That’s still what I identify with and did so throughout my entire story,” Nash concluded.