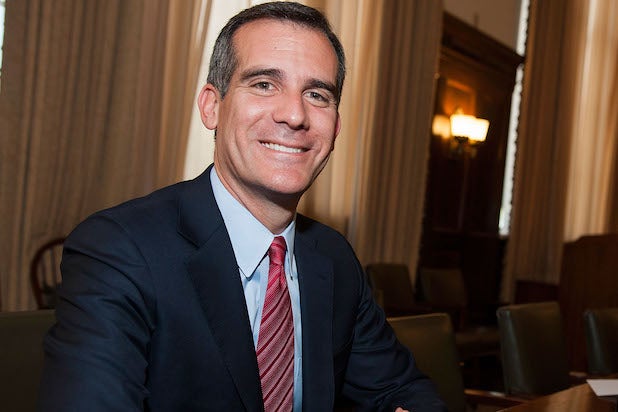 One of Eric Garcetti’s advisers denies the Los Angeles mayor might run for president. But Garcetti’s travel schedule sure looks like a presidential hopeful’s.

This week, Garcetti’s image dominated a Politico story with the headline, “The 2020 campaign just kicked off in a New Hampshire strip mall.” The story led with Garcetti paying the kind of political dues necessary to run for president, given that New Hampshire holds the first presidential primary.

In May, Garcetti delivered a speech in Wisconsin — one of the states Hillary Clinton accidentally ceded to Donald Trump. Just seven months into Trump’s presidency, many Democrats already have their sights on 2020.

“He is doing the things that a proto-candidate would do,” Jack Pitney, professor of government at California’s Claremont McKenna College, told TheWrap. “Whether he’ll actually make the decision to run is anyone’s guess. But he’s definitely thinking about it.”

No mayor has ever jumped straight to 1600 Pennsylvania Avenue. But given Trump’s total lack of political experience before he scored the biggest job in the country, experience as a senator or governor may no longer be seen as a necessity.

Garcetti was once best known as the son of Gil Garcetti, the Los Angeles County prosecutor who led the cases against O.J. Simpson, among others.

But he has staked out his own political reputation: He’s a Rhodes scholar, relatively young (46), and by most accounts has had a successful first term as mayor of the country’s second-biggest city. His wins include spearheading tax increases to fund a $120-billion mass transit plan and persuading the City Council to enact a law requiring the strengthening of buildings to withstand earthquakes.

He also checks a lot of boxes.

“He’s an Hispanic Jew with an Italian surname. You’d have to go back to Fiorello La Guardia to find someone who is a balanced ticket all by himself,” Pitney said, referring to the former Jewish-Italian mayor of New York. (Garcetti would be the first Hispanic president and first Jewish president.)

He also knows all the major players in the Hollywood fundraising scene who bankrolled a large chunk of Hillary Clinton’s estimated $1.4 billion campaign.

“Eric is a true leader with a dynamic personality and a strong grasp of the issues,” Dana Perlman, attorney and former Clinton bundler, told TheWrap. “As far as running a campaign, he has been a strong fundraiser.”

Asked whether he would offer his fundraising skills to Garcetti should the mayor decide to run for president, Perlman said he cares most about Congressional races: “While all of this supposition and conjecture may be interesting, I am 100 percent focused on 2018.”

Another prominent Clinton fundraiser, who asked not to be named, told TheWrap: “I don’t know if he’ll do it, but I would love it if he ran.”

Garcetti’s political advisor, Yusef Robb, insisted the mayor is “not running” for president in 2020. But when asked whether that statement might change in a couple of years, Robb told TheWrap: “Right now he’s focused on being mayor of L.A.”

But Perhaps Garcetti’s biggest competition would be Kamala Harris — because they are so similar. The senator from California “would be the first African-American woman and also the first Asian-American to be president because of her Indian heritage,” Pitney noted.

But Pintey believes Garcetti could hold his own against Harris, despite her national prominence.

“He has executive experience as mayor,” Pintey said. “And while some people might say he doesn’t have any foreign policy experience, he was in the military, which is important.  And she hasn’t done much yet.”

If Garcetti doesn’t go for president, there may be a pretty good consolation prize. There has also been speculation that Garcetti might run for governor of California, which holds its gubernatorial election next year.