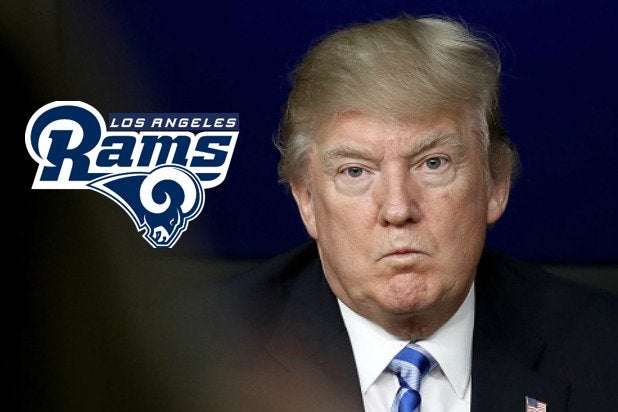 The Los Angeles Rams has joined the nationwide debate about NFL players’ right to refrain from standing during the national anthem, saying, “We will continue to support our players’ freedom to peacefully express themselves and the meaningful efforts they make to bring about positive change in our country.”

As football fans around the country gathered around their TVs to watch Sunday’s games, Rams owner/chairman E. Stanley Kroenke issued a statement in support of both the national anthem and the freedom of speech.

“We believe in the tenets of the national anthem, which is a pillar of this country; just as freedom of speech is another pillar and a constitutional right,” Kroenke wrote in part.

Read Kroenke’s statement in full below:

“The Los Angeles Rams, our fan base and our city are all comprised of people from a variety of backgrounds and beliefs. When we recognize that this diversity is our strength and seek to understand different perspectives, we are more enlightened and empathetic human beings. Our organization is committed to celebrating diversity, inclusion and respect, values that help define Los Angeles. We are proud of the work that our players and all NFL players do to make our communities better places to live. We believe in the tenets of the national anthem, which is a pillar of this country; just as freedom of speech is another pillar and a constitutional right. We will continue to support our players’ freedom to peacefully express themselves and the meaningful efforts they make to bring about positive change in our country.”

President Donald Trump kicked up his ire against athletes who kneel during the “Star Spangled Banner” to protest racial injustice Sunday morning, calling for players who do so to be “fired or suspended” and suggested a boycott of NFL games.

Also Read: All the Anthem Protests Happening Around the NFL This Sunday (Updating)

“If NFL fans refuse to go to games until players stop disrespecting our Flag & Country, you will see change take place fast. Fire or suspend!… NFL attendance and ratings are WAY DOWN. Boring games yes, but many stay away because they love our country. League should back U.S.”

U.S. Treasury secretary doubled down on Trump’s attacks, telling CNN’s Jake Tapper on Sunday morning, “Players have the right for free speech off the field. On the field, this is about respect.”

The POTUS’ comments that began Friday night at an Alabama rally where he told the crowd “Wouldn’t you love to see one of these NFL owners, when somebody disrespects our flag, to say ‘get that son of a b—h off the field’ right now, out! He’s fired?'” has stirred up a firestorm of reactions that continues to blaze.