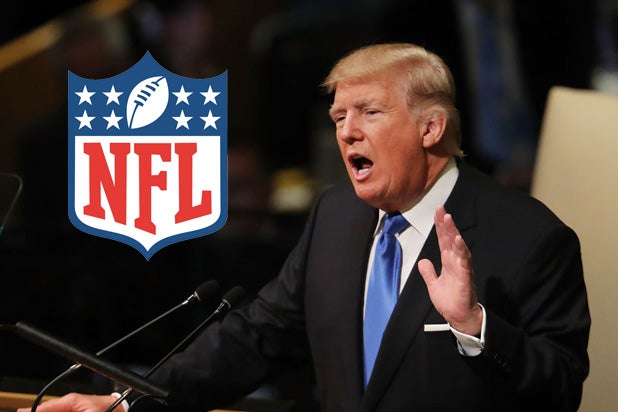 In response to Donald Trump’s criticisms of athletes who kneel during the “Star Spangled Banner,” teams throughout the NFL are staging protests and demonstrations of unity during the national anthem.

The demonstrations come after athletes from various sports attacked Trump on Saturday for his comments during a rally in Alabama and subsequent tweets, in which he called for fans to boycott teams with players who kneel during the anthem and for teams to fire those players. The protest was started by former San Francisco 49ers quarterback Colin Kaepernick to speak out against racial injustice.

Also Read: Steven Mnuchin Bashes NFL on Anthem Protests: 'Players Have the Right for Free Speech Off the Field'

“If a player wants the privilege of making millions of dollars in the NFL,or other leagues, he or she should not be allowed to disrespect…. our Great American Flag (or Country) and should stand for the National Anthem. If not, YOU’RE FIRED. Find something else to do!” Trump tweeted.

Trump also rescinded his invitation to the NBA champion Golden State Warriors to visit the White House after reports surfaced that Steph Curry and teammates were reluctant to appear with the president. Cleveland Cavaliers star LeBron James responded by calling Trump a “bum” on Twitter and later released a video explaining his thoughts.

“I think it’s basically at a point where I’m a little frustrated, man, because this guy that we’ve put in charge has tried to divide us once again,” James said. “Obviously we all know what happened with Charlottesville and the divide that caused. Now it’s hit home more for me because he’s now using sports as the platform to try and divide us.”

On Saturday, Oakland Athletics catcher Bruce Maxwell became the first player in Major League Baseball to kneel during the anthem. The Athletics released a statement on Twitter shortly after saying they “respect and support all of our players’ constitutional rights and freedom of expression” and “pride ourselves on being inclusive.”

Now pro football teams and personalities are speaking out against the president and against racial injustice. Here’s a running count of the comments and demonstrations seen in the league so far:

JACKSONVILLE JAGUARS: Several members of the Jaguars kneeled during the anthem just before kickoff at the NFL’s annual game in London. Players who didn’t kneel locked arms with coaches, staff, and team owner Shadid Khan.

BALTIMORE RAVENS: The Jaguars’ opponents for the London game also had several players kneel before the anthem. Between the two teams, 25 players kneeled during the anthem, the most ever in a single game.

PITTSBURGH STEELERS: Head coach Mike Tomlin said that the Steelers will remain in the locker room during the national anthem. Prior to 2009, NFL teams were not present on the field during the anthem, according to CSN New England, and in 2015, a Senate report criticized the Dept. of Defense and National Guard for paying sports leagues to demonstrate acts of patriotism.

NFL BROADCASTERS: On Fox, NFL analyst Terry Bradshaw criticized Trump’s comments, saying that while he doesn’t condone kneeling during the anthem, he believes that “every American has the right to speak out”

On CBS, former coach Rex Ryan said he supported Trump during the election, but was “pissed off” by his remarks.

“Right away I’m associated with what Donald Trump stands for and all that because I introduced him. I never signed up for that, I never wanted that. That doesn’t mean I support 100 percent of the things he says.”

NEW ENGLAND PATRIOTS: Patriots owner Robert Kraft, a longtime friend of Trump, said he was “deeply disappointed” with the president’s comments in a statement released on the Patriots’ Twitter page.

On the field, at least ten members of the Patriots kneeled during the anthem.

Over ten players on the @Patriots took a knee during the national anthem. ✊️ #TakeTheKnee. pic.twitter.com/9SxkUo67FT

LOS ANGELES RAMS: The Rams did not play Sunday, having already played on Thursday night against the 49ers. However, owner Stan Kroenke also released a statement supporting their players’ right to “peacefully express themselves.”

In 2014, following the Ferguson riots, members of the then-St. Louis Rams walked out during player introductions with their hands up to show solidarity with those protesting against police brutality. The St. Louis Police Department claimed the team apologized for the demonstration, which the Rams refuted.

DETROIT LIONS:  Eight members of the Lions kneeled during the anthem, while the rest of the team locked arms along with team owner Martha Ford. On the field, anthem singer Rico LaVelle kneeled and raised his microphone after completing the song.

The singer of the national anthem at the Detroit Lions game today ends on one knee, fist in the air pic.twitter.com/hCeWWjpmQa

SEATTLE SEAHAWKS and TENNESSEE TITANS: The Titans and Seahawks played each other this weekend, but both teams remained in the locker room during the national anthem and each released joint statements, with the Seahawks players saying they would “not stand for the injustice that has plagued people of color in this country.” “The Voice” contestant Meghan Linsey kneeled after singing the anthem.

During the Seahawks-Titans game, both teams didn’t come out for the playing of the anthem and the anthem singer kneeled pic.twitter.com/u5AM9BowUG

MIAMI DOLPHINS:  During pre-game warmups, the Dolphins wore shirts with the hashtag #ImWithKap, expressing their support for Colin Kaepernick who has not been signed to an NFL team since leaving the 49ers at the end of last season. Kaepernick’s supporters believe that his protests, not his play, is the reason why he is not currently signed to a team.

Several Miami Dolphins players are wearing #IMWITHKAP T-shirts on the field for warmups. (via @JamesWalkerNFL) pic.twitter.com/c7SYeGROkn

DENVER BRONCOS:  The majority of Broncos kneeled during the anthem, while the handful that remained standing places their hands on their kneeling teammates in support.

An overwhelming majority of the Denver @Broncos took a knee today during the national anthem. ✊ #TakeTheKnee