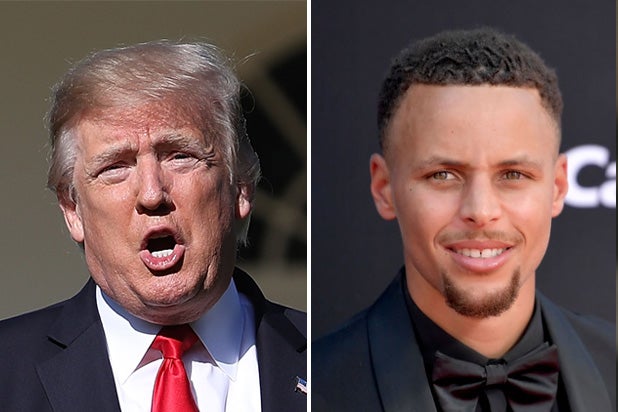 UPDATE:  The Golden State Warriors have accepted the retraction of President Trump’s invitation to the White House and issued the following statement:

“While we intended to meet as a team at the first opportunity we had this morning to collaboratively discuss a potential visit to the White House, we accept that President Trump has made it clear that we are not invited. We believe there is nothing more American than our citizens having the right to express themselves freely on matters important to them. We’re disappointed that we did not have an opportunity during this process to share our views or have open dialogue on issues impacting our communities that we felt would be important to raise.

In lieu of a visit to the White House, we have decided that we’ll constructively use our trip to the nation’s capital in February to celebrate equality, diversity and inclusion – the values that we embrace as an organization.”

PREVIOUSLY: President Donald Trump on Saturday rescinded a White House invitation to Stephen Curry and his NBA Championship-winning Golden State Warriors in the wake of reports that Curry and teammates were reluctant to appear with the president.

“Going to the White House is considered a great honor for a championship team,” POTUS tweets on Saturday. “Stephen Curry is hesitating,therefore invitation is withdrawn!”

Going to the White House is considered a great honor for a championship team.Stephen Curry is hesitating,therefore invitation is withdrawn!

Curry as well as Warriors coach Steve Kerr and Finals MVP Kevin Durant have voiced ambivalence about following the annual ritual visit to the White House in light of Trump’s response to the deadly rally by white supremacists and neo-Nazis in Charlottesville, Virginia last month.

“I don’t want to go,” Curry said on Friday, according to USA Today. “That’s kind of the nucleus of my belief…(But) it’s not just me going to the White House. If it was, this would be a pretty short conversation.”

Trump’s tweet also comes just hours after the president, speaking at a fiery Alabama rally on Friday night, called on NFL teams to fire any player who protested during the national anthem.

How will Jazmine Sullivan and Eric Church sound in their duet for 2021’s Super Bowl?