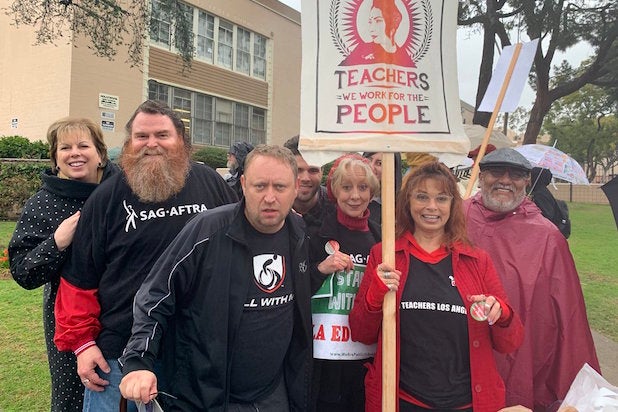 Adam Conover, star of the myth-debunking show “Adam Ruins Everything,” doesn’t have anyone in his family who goes to or is employed by an LAUSD school. But after he received an email from the Writers Guild of America West — of which he is a member — encouraging members to support United Teachers Los Angeles, he decided to join in the strike that began Monday and could determine the future of education in California.

“I was going to go out there and give water and see if people needed to use my bathroom,” Conover told TheWrap. “Then I got a letter from the guild saying they’re all heading out there, and I called up my show’s head writer, Alison Zeidman, and said, ‘Hey, let’s get out there and help out.'”

“I know that the reason I have a fair stake in my show is because of organized labor in Hollywood and the bargaining power that comes with it. I owe my mortgage payment to that. Now, at a time when that bargaining power is being seriously threatened, it’s really important for all of us to show solidarity with these teachers.”

Conover described the mood on that first day as energized and positive, and that emotion has remained strong at protests across the county. But it has still been a turbulent time not just for the teachers, but for entertainment industry workers with kids enrolled and spouses employed by LAUSD. And along with voicing their support and encouraging solidarity, Hollywood is offering support and services to those affected by the work stoppage.

Insiders at Warner Bros. and Universal told TheWrap that studio employees are being encouraged to discuss flexible hours with their managers, while digital studio Fullscreen has offered day care and remote work to employees affected by the strike. On the guild side, some IATSE locals have created funds to help affected members. The North Hollywood-based Local 728, which represents lighting technicians, approved a $5,000 fund to support members married to striking teachers, and has adopted North Hollywood High and the adjacent Colfax Elementary as a site where members have joined picket lines throughout the week.

“There’s been a lot of talks between our members and our leadership about what we could do to help out,” said 728 member Ryan Thomas, who was present at the NoHo High line. “Originally, the membership committed the fund just for our members who were in the strike, but then the leadership also proposed a $2,500 general fund to support all UTLA members, and that was approved and doubled to $5,000 as well.”

The other major guilds have also adopted schools, with SAG-AFTRA supporting teachers at Hollywood High School — where actors like Benjamin Bratt and Jesse Eisenberg have been seen on the lines — and WGA West adopting Hancock Park Elementary. Both schools have seen dozens of guild members join teachers on the lines, while teamsters have been encouraged to not cross the picket line to work at shoots located on LAUSD campuses.

We stand with @UTLAnow educators as they fight for a fair contract, smaller class sizes, full & equitable funding to support students, and RESPECT. Their fight is our fight! #Red4Ed #Strikeready #UTLAStrong pic.twitter.com/qg4paFV20Z

“If you are filming on a location at a school that has an active picket line you do not have to cross. We urge members to stand in solidarity with educators by honoring their picket lines,” read a statement on the Teamsters Local 399 website. “Going on strike is never an easy decision. In fact, as we all know, it’s a last resort. Workers put everything on the line to stand together for what’s right.”

Meanwhile, UTLA and LAUSD Superintendent Austin Beutner agreed to meet Thursday for another round of bargaining talks, which would be mediated by Los Angeles Mayor Eric Garcetti. Among UTLA’s demands are smaller class sizes and specialized staff at every school, including nurses, counselors and librarians. Teachers on the picket line have also protested against Beutner’s pro-charter school stance, which they argue comes at the cost of public schools and lower-income students.

The UTLA strike has been joined by a second strike among teachers at three South Los Angeles charter school teachers, only the second such occurence in American history. The teacher work stoppage in Los Angeles also comes after a 2018 in which teachers in West Virginia and five other states walked out to protest low wages and a lack of student resources.

UTLA President Alex Caputo-Pearl said that an immediate end to the strike isn’t coming anytime soon, but called on teachers, parents and supporters to show support for the union’s bargaining team at City Hall on Friday. SAG-AFTRA says that it will attend the rally, which is aiming for an attendance of 50,000.

“Everyone should be aware that we have been at this for 20 months and there are several fundamental issues that we have key differences on,” Caputo-Pearl said on Thursday. “It’s not going to be a clean and easy process, but there has been hard work done on it.”

Conover says he is planning to support the picket lines again next week before production starts again on “Adam Ruins Everything,” a show in which he tackles commonly-held myths surrounding various topics and political issues. Public education has been one of those issues, with a future episode arguing that the Teach for America program that places college graduates in low-income community schools is actually detrimental to those students, because they take away jobs from more experienced teachers who are rooted in the community. Conover also says that backers of charter schools and school privatization support Teach for America because it offers a low-wage alternative to paying more experienced or unionized teachers.

Conover says that doing research on the program taught him a lot about the struggles that American teachers face, and he commends them for taking a stand beyond just meager pay.

“The teachers are the only ones saying the conditions in the school is not acceptable. 45 students in a class is not acceptable, and we can’t have a school system function this way,” he said. “They are taking this personal risk on themselves to make this stand and challenge not just the school district, but the politicians in Sacramento who could really make a change.”