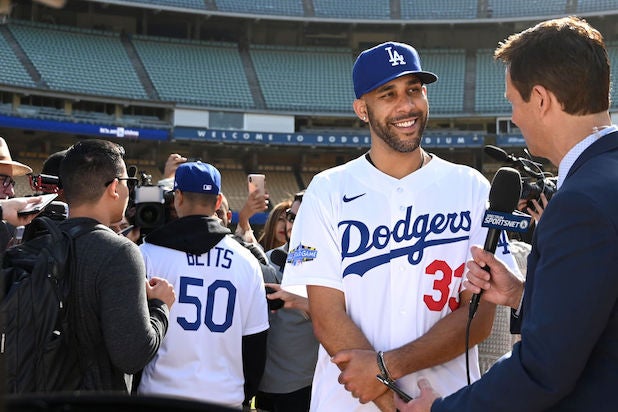 Mookie Betts and David Price are interviewed during a press conference at Dodger Stadium on February 12, 2020. (Jayne Kamin-Oncea / Getty Images)

A proposal for resuming sporting events in L.A. County without fans includes a number of physical distancing and sanitation measures that would limit court and locker room access for reporters and require athletes and training staff to wear face coverings at all times, aside from during gameplay or when they’re exercising.

The proposal, provided to TheWrap, was developed by representatives from all the major sports and entertainment venue organizations in the county, which includes the Dodgers, Lakers, Clippers, Rams, Dodger Stadium, Staples Center and Hollywood Bowl.

The proposed guidelines would limit the number of reporters who can participate in press conferences, create a designated room in locker room corridors for pre- and post-game interviews and require a single cameraperson and reporter from one network to provide a pool feed of interviews for reporters watching from the press room. Sports photographers would also be recommended to “shoot from elevated locations and not on the playing surface” to ensure physical distancing, and camera crews would be relocated to seating sections, given there would be no spectators watching.

The proposal also recommends all personnel and athletes must be symptom-free for 14 days and will be screened before they enter any venues or training facilities. Athletes must not share equipment when possible; equipment that must be shared, like treadmills and exercise benches, will need to be disinfected “before, during, and after training,” the proposal says. Shared equipment used during games will also need to be disinfected “before and after every shift.”

“The County is home to the most sports teams, venues and universities in the State, and this reopening will put us on a path to putting tens of thousands of County residents back to work and restoring dignity and normalcy to countless lives and livelihoods,” Casey Wasserman, who represents the sports industry on LA County’s Economic Resiliency Task Force, wrote in a letter to the county’s board of supervisors. “Greater still, these plans provide the scaffolding to begin to restore the communal and rehabilitative joy generated by the crack of a bat, a sprinting score, and the magic of live music.”