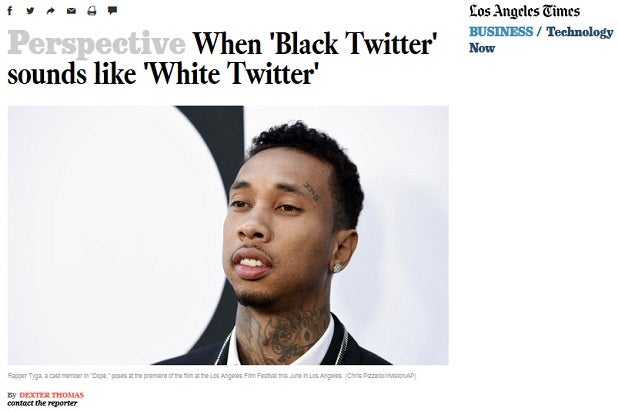 While other major newspapers have written stories about the alternate social-media universe referred to as “Black Twitter,” the LA Times is the first to have a full-time reporter dedicated to subject. But judging by the reaction, this new coverage beat is off to a bumpy start.

The Times found itself on the receiving end of outrage Thursday for a story suggesting that Black Twitter doesn’t operate with one collective mind.

Black Twitter might not, as Thomas suggests, be a monolithic social-media entity, but the responses to his article seemed to be pretty unanimous in their condemnation.

“You get hired to cover #BlackTwitter and the first thing you write is how it sounds like “White Twitter.” Wut. @dexdigi, that was a fail,” Twitter user Awesomely Luvvie posted.

“Is this an episode of Blackish? Cuz @dexdigi sounds like he got lost in Hancock Park trying to find S. Central,”
writer-producer Alyss Dixson tweeted.

Read more Black Twitticisms on the article below.

In short, the @LATimes wrote one of the worst articles re: #BlackTwitter that I’ve ever read.

I see what @latimes is trying to do with this Black Twitter beat. But the approach isn’t working…

Safe to say the LA Times Black Twitter beat is a complete flop which is being laid to rest with the #blacktwitterfacts hashtag. Eye-Roh-Knee

You get hired to cover #BlackTwitter and the first thing you write is how it sounds like “White Twitter.” Wut. @dexdigi, that was a fail. — Awesomely Luvvie (@Luvvie) July 16, 2015

Is this an episode of Blackish? Cuz @dexdigi sounds like he got lost in Hancock Park trying to find S. Central. http://t.co/4EEg7K5u6u

The @latimes has successfully succeeded in making a mockery of #BlackTwitter: http://t.co/SIbSAbmjV6

An LA Times Editor was like “Hmmmmm we need our own @GOPBlackChick to write about Black Twitter. Who can we afford?” pic.twitter.com/QZmAwQX0lc — Alexander Hardy (@chrisalexander_) July 16, 2015