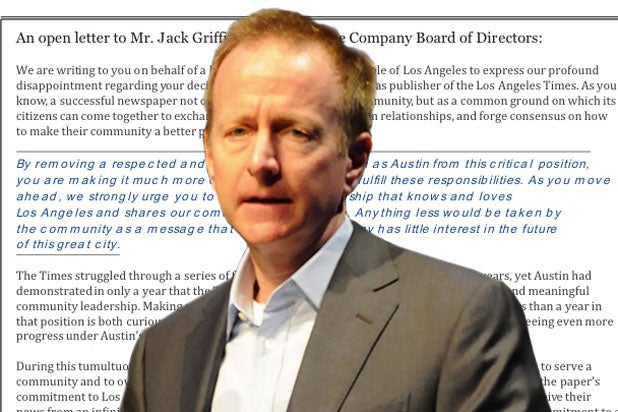 Emphasizing that “Austin had demonstrated in only a year that the Times was once again capable of impactful journalism and meaningful community leadership,” Riordan, Villaraigosa and nine other signatories expressed their “profound disappointment” regarding the decision to dismiss the civic leader and former Wall Street investment banker.

The letter went on to assert the role of the Times as not only “the voice of a community, but as a ground on which its citizens can come together to exchange ideas, create and strengthen relationships, and forge consensus on how to make their community a better place to live.”

The decision to fire Beutner, the letter said, is “making it much more difficult for the Times to fulfill these responsibilities.”

The Tribune Publishing Co. fired Austin Beutner Tuesday morning, with the news first being reported in the L.A. Times itself. The newspaper’s report cited the Times’ lagging financial performance under Beutner’s leadership, as well as a series of expensive executive hires.

Still, the letter said, “Making such a drastic decision to terminate [Beutner] after he had served less than a year in that position is both curious and disappointing.”

Beutner wrote in a 1,316-word Facebook post on Tuesday, “I am not departing by choice, nor is this some ‘mutual agreement’ on my part and Tribune Publishing. Tribune Publishing has decided to fire me. I am sorry you will read this on social media, but I no longer have access to my Times email.”

It’s worth noting that Beutner once served under Villaraigosa, when in 2010 the then-mayor appointed him deputy mayor of economic development, a position in which he oversaw 13 city departments.

The joint letter to Tribune urged Griffin to replace Beutner “with leadership that knows and loves Los Angeles and shares our commitment to its future,” warning that “anything less would be taken by the community as a message that the Tribune Company has little interest in the future of this great city.”