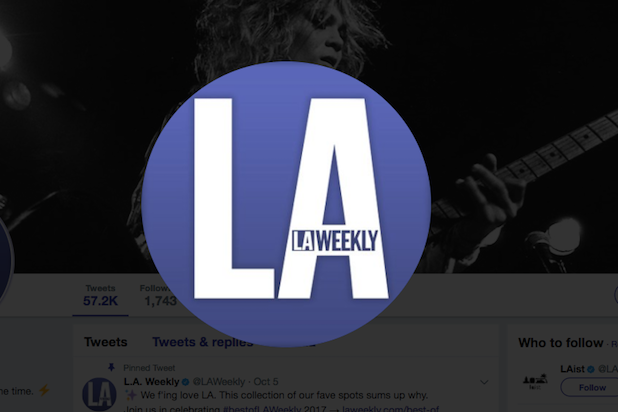 In a new lawsuit, a co-owner of LA Weekly has accused other owners of a pattern of unethical behavior, including looting the paper’s assets to “enrich themselves,” and is seeking to dissolve the company through which they share ownership.

The lawsuit, filed August 27 in the Los Angeles Superior Court by David Welch, also accuses the other owners of freezing Welch out of management, and of ignoring his attempts to bring ethical concerns to their attention.

Named in the lawsuit are the principle investors in LA Weekly’s parent company Street Media, LLC, which the suit says also operates as Semanal Media LLC: publisher Brian Calle, and co-owners Kevin Xu, Steve Mehr, Wayne Gross, Andy Bequer, Mike Mugel, Paul Makarechian, Alan Greenberg, and professional skateboarder Nyjah Huston. Huston, who previously was not disclosed as an owner, was stated in the lawsuit to have a 2 percent share of LA Weekly.

Calle, who was appointed publisher of LA Weekly in November after purchase of the paper to Street/Semanal was finalized, was singled out for particular criticism.

“He has all but destroyed the legacy of first-rate journalism that built the LA Weekly brand, crashed web traffic and obliterated the once-thriving live event business,” the suit says. “He has accomplished this through a combination of breathtaking incompetence, self-dealing and fraudulent intentions.”

The suit says that Calle made “false claims” about his plans for the paper, mandated editorial changes that favored major advertisers, and through his decisions did severe damage to the paper’s reputation and legacy. The filing says the #BoycottLAWeekly campaign, founded by former staffers after Calle laid off almost the entire newsroom, was one particularly severe consequence, but that it was “only the beginning.”

Also Read: LA Weekly's New Interim Editor-in-Chief Explains Why He Wasn't Laid off Along With Colleagues

According to the suit, LA Weekly owners also provided ad space to companies they have interest in “at substantially below-market rates,” diverted advertising to a company established by several owners, and provided favorable coverage of a company owned by Calle without disclosing that relationship.

Welch also says in the suit that “the management team diverted assets of the LA Weekly to enrich themselves individually through sweetheart advertising deals or outside consultancy agreements to the detriment of the LA Weekly staff and LA Weekly advertisers.”

Representatives for Calle, Xu, Mehr and Nyjah Huston did not immediately respond to TheWrap’s request for comment. Others named on the suit could not be reached for comment.

The lawsuit marks a change for Welch, who released a letter jointly with Calle in December that defended their decision to cut the majority of the editorial staff. The letter said that they acknowledged “numerous missteps” in the transition of leadership at the alternative weekly, and said they were committed to “inclusion, diversity, and, above all, a free and independent press.”

In addition to calling for Street Media/Semanal Media to be dissolved as a company, the lawsuit also seeks punitive and compensatory damages.