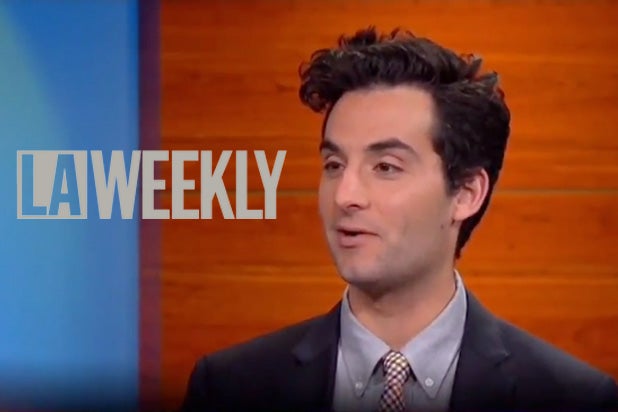 In another setback for LA Weekly, recently-hired interim editor-in-chief Hillel Aron has been suspended without pay, after old tweets deemed offensive by critics and by the publication’s new owners came to light.

“LA Weekly has zero tolerance for discrimination of any kind. Past comments posted by Hillel Aron on Twitter that have come to our attention over the last 24 hours are extremely offensive and unacceptable,” Publisher Brian Calle and general counsel David Welch said in a statement provided to TheWrap. “They are not in line with LA Weekly’s values and do not reflect the views of our team. As of today, Mr. Aron has been suspended without pay while an investigation is underway.”

The tweets, unearthed Monday by Spin, were written between 2007 and 2012 and feature several off-color jokes at the expense of gay people, people with disabilities, and other groups. Aron called them “bad attempts at humor” in a statement provided to Spin, and apologized, saying “I regret them, I’m embarrassed by them, and I wish I could take them back.”

Aron did not immediately respond to a request for comment from TheWrap.

Aron was the only staff writer retained when most of his colleagues were laid off Nov. 29 shortly after new owners Semanal Media finalized purchase of LA Weekly. He was named interim editor-in-chief on Dec. 8, and said he accepted the job after the new owners agreed to concessions including the return of union representation, and the rehiring of at least two former editorial staffers.

Aron told TheWrap at the time that he had expected to keep his job because of a prior relationship with Calle, but that the scope and scale of the layoffs came as a shock. His suspension from LA Weekly just four days later leaves the 40-year old magazine without any writers or editors.

But it’s only the latest problem for the alt-weekly since Semanal Media, a consortium created specifically to purchase LA Weekly and made up largely of Republican donors, took ownership of the site. Notably, in addition to a PR debacle in which one of the owners appeared to denigrate the culture of Los Angeles, a successful boycott effort organized by former LAW writers caused an exodus of advertisers, forcing LA Weekly to cancel its annual Sips & Sweets event.