It didn’t end with the Labor Day bang the studios may have hoped for, but a record is a record.

Put 2009 in the books as the biggest summer yet for domestic movie distribution.

The Labor Day weekend was down 12% from last year, according to studio estimates, for which the industry can thank the lukewarm performers this weekend — Lionsgate’s "Gamer" with Gerard Butler and Fox’s "All About Steve" with Sandra Bullock.
Attendance was down 2.4 percent compared to 2008’s record-breaking summer, according to Hollywood.com. And this year’s 1.3 percent increase in total revenue to $4.4 million didn’t even cover ticket-price increases boosted by 3D releases.
But still: fighting the worst economic climate since the Great Depression, the studios will take the record.
And that doesn’t include huge international numbers for blockbusters including "Angels and Demons," ($351 million overseas) "Transformers 2" ($430 m) and "Harry Potter: The Half-Blood Prince" ($620 million).
These numbers have left Warner Brothers and Paramount sitting at the top of the Hollywood studio heap.  (See chart, from boxofficemojo.com, and see our previous summer Wrap-up: Twitter, 3D and ‘The Hangover.’")
"Given the (economic climate) we’re living in, and given the quality of the movies that were released last summer, to come in slightly up on gross and almost flat on attendance is a pretty good result," Paramount Distribution General Manager Don Harris told TheWrap. 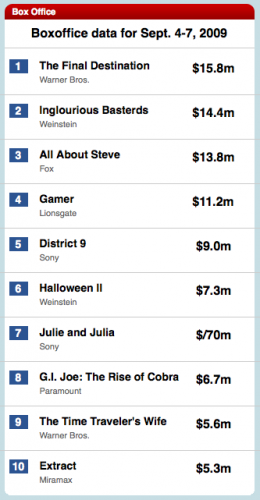 Added Fox senior VP of domestic distribution Chris Aronson: "I’d say most of us came out (of the summer) pretty well. We had a nice combination of sequels and reboots to go along with critical darlings like ‘District 9’ and ‘Inglourious Basterds.’"
Despite a lukewarm Labor Day release slate this year, there was some hope that the four-month season, which officially started May 1 and ended Monday, would not conclude with a fizzling four-day performance — but for the most part, that’s just what happened.
Overall returns for the weekend came in at $114.7 million — that’s down 12 percent from Labor Day 2008, according to one studio’s tally.
None of the weekend’s three major releases — Fox’s romantic comedy "All About Steve;" Lionsgate thriller "Gamer;" and Miramax Mike Judge niche comedy "Extract" starring Jason Bateman — managed to move the needle much.
First place ended up in the hands of Warner/New Line’s second-week horror holdover, the 3D "The Final Destination," which tumbled a respectable 47 percent to $15.8 million at 3,121 locations. With $51 million banked domestically, it’s by far the best start in the nine-year, four-film history of the franchise.
Coming in second was Quentin Tarantino’s Weinstein-distributed "Inglourious Basterds." The Nazi-hunting Brad Pitt actioner added $14.4 million to its domestic bounty over the weekend, bringing its North American total to $94.6 million. Weinstein and its financing partner on the project, Universal, have already received $174 million oversees from "Basterds."
Among new entrants, Fox’s PG-13-rated comedy "All About Steve" wasn’t able to parlay the earlier summer success of Bullock ("The Proposal") and "The Hangover’s" Bradley Cooper into something bigger than a $13.8 finish over the four-day weekend. Playing at 2,251 locations, the poorly reviewed film came in third. 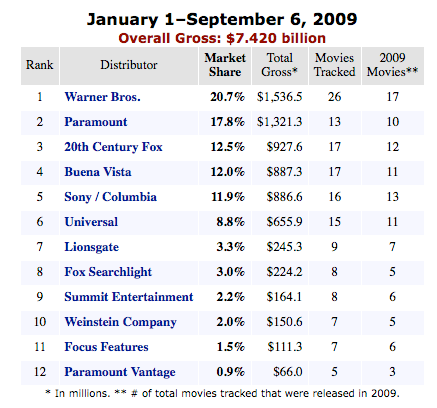 Meanwhile, Lionsgate thriller "Gamer," written by the "Crank"  team of Mark Neveldine and Brian Taylor lived up to middling pre-release expectations, taking in $11.2 million at 2,502 venues.
One other new release, Miramax’s decidedly niche comedy "Extract," finished in 10th with $5.3 million at 1,611 sites.
Still, despite the lukewarm performances of the weekend’s new entries, some of the older holdovers that cranked up July and August — and put this summer over the top — managed to eek by key benchmarks.

Paramount’s "Transformers: Revenge of the Fallen," for example, brought in another $1 million over the weekend and now has a domestic total of $400.7 million. And having generated $428.6 million oversees and $829 million globally, Michael Bay’s second "Transformers" movie completed the season trailing only Warner’s "Harry Potter and the Half-Blood Prince," which is now closing in on $900 million worldwide.

Also hitting nice round numbers over the final summer weekend was Sony’s "District 9," with $9 million in receipts over the four-day weeken. It has now generated $103.3 million domestically. Sony spent just $25 million to license the Peter Jackson-produced film in North America and a bunch of key international territories.
With the $40 million Nora Ephron-directed comedy "Julie and Julia" still in play, earning another $7 million to surpass the $80 million dometic mark, Sony managed to finish off strongly a summer that had earlier included the dud "Year One" ($53.8 million worldwide) and the middling performer "The Taking of Pelham 123" ($101.1 million worldwide).
"I think we had some great movies and incredible concepts that were released on a reasonable budget," said Sony distribution president Rory Bruer, also noting the late-summer success of romantic comedy "The Ugly Truth," another $40 million film that has taken in $87.6 million domestically to date.
Despite the late surge, Sony wasn’t able to claim the summer revenue crown. That belonged to Warner Bros., which, keyed by the success of films including "Harry Potter" and comedy hit "The Hangover" ($272.1 million to date) finished the four-month season with $957 million going into Labor Day weekend, according to Nielsen EDI.
Paramount, which had back-to-back-to-back hits with "Star Trek," "Transformers 2" and "G.I. Joe," finished in second place, with $874 million.
Disney came in third with $604 million, driven by 3D family hits including the Pixar-generated "Up" and the Jerry Bruckheimer-produced CGI/live-action combo "G-Force."
x
Looks like you're enjoying reading