(Updated: Friday 12:20 PT)
Joseph Abboud, a New Bedford, Massachusetts based clothier that has dressed stars like Tracy Morgan, released a statement supporting Glover’s Hugo Boss boycott and using the opportunity to promote its own record of employing U.S. workers.
Supporting a boycott of a competitor seems like a pretty easy principled stand to take. Wonder what Armani’s position will be?
Earlier:
Hollywood stars may find their politics as well as their clothes under scrutiny on the red carpet Sunday after a call by activist-actor Danny Glover to boycott Hugo Boss in support of a labor union.
The German fashion house is poised to close a union factory in Cleveland, Ohio, in April to save costs, a move that will cost in the neighborhood of 300 jobs. On Thursday, Glover called on his actor friends to boycott the designer that in recent years has dressed the likes of Jeff Bridges, Phillip Seymour Hoffman and Paul Giamatti.
So will the stars boycott the popular designer?
“It would be a huge blow for them if people were to side with the union and boycott the brand,” Marcy Medina, west coast bureau chief for Women’s Wear Daily, told TheWrap.
"It was a really savvy move on the part of the worker’s union,” she said. “The Oscars is not just a forum for acting and the arts. Anyone who has a cause can get attention if they muscle in on the Oscars in some way."
Hugo Boss has not been the most popular label on the red carpet of late, giving way to the more flashy and form-fitting Dolce and Gabbana, or Armani (favored by le Clooney). Best actor nominee Colin Firth  will be dressed this year by his designer-cum-director Tom Ford.
But will nominee Jeff Bridges wear Boss, as he has in the past, or will he boycott?
His spokeswoman at the Lippin Group Jean Sievers said the star would be wearing Gucci. 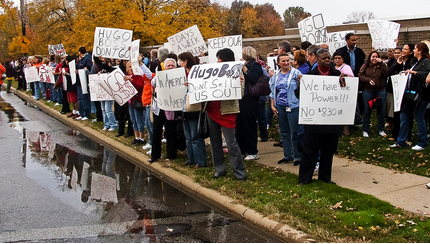 Meanwhile, Boss has been having a rough year — and a backlash could spell further trouble for the clothing-maker. The company saw profits fall 7 percent last year as it moved to shutter unprofitable stores and was criticized by some analysts for its lower visibility. Following the news of the boycott, shares of Hugo Boss were trading slightly down at just over $35 after stock markets opened in Europe.
In his letter, Glover wrote that the factory could easily be rescued, and the jobs saved.
"The workers are productive and the plant is profitable," Glover writes. "But Hugo Boss has decided it can make even more profit by moving the production to Turkey or Eastern Europe."
"Hugo Boss says it wants to expand business in this country, and the brand depends on Hollywood cachet. Please tell the world you won’t be wearing Hugo Boss on March 7."
(Click here to read his entire letter.)
Glover’s letter says the closure will cost more than 400 employees their jobs, but a Hugo Boss spokesperson disputed that and said the number is closer to 300.
Elizabeth Stewart, a stylist who will dress Amanda Seyfried on the red carpet this year, said the move may be counterproductive.
“It’s heartbreaking that people are losing their jobs, but are people not buying Hugo Boss? If not, then a boycott will probably not keep the factory open,” she said. “They’ll probably hurt their cause by hurting Hugo Boss.”
Glover has sent personal appeals to those actors and to nominees and presenters such as George Clooney, Morgan Freeman, Colin Firth, Jeremy Renner and Sean Penn to forgo wearing tuxedos and to  sport a pin on their tuxedos reading "Keep the Hugo Boss Plant Open" as a sign of solidarity.
It’s not clear if any of those actors or other Oscar attendees will still wear a Boss suit and risk a public relations backlash. More likely, said Medina, is actors would avoid the controversy by wearing a different designer – but not advertising any politics on their lapel.
“You might just choose not to wear it, and not publicly state the reason way – it would be most tactful way to play both sides and make everyone happy.,” she said.
x
Looks like you're enjoying reading