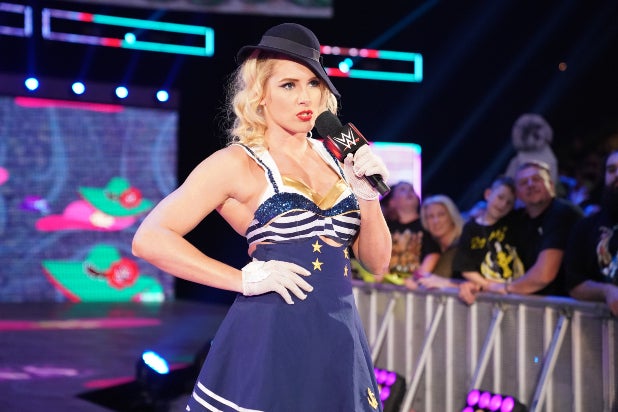 WWE Superstar Lacey Evans (real name Macey Estrella-Kadlec, born Macey Evans) knows a thing or two about what military families need. And on Sunday, the Marine-turned-professional wrestler will aim to provide a bit of entertainment, distraction and levity to those families through the 18th annual “WWE Tribute to the Troops” event on Fox.

In her previous life as a member of the U.S. Marines’ SRT (Special Reaction Team) — which is basically the S.W.A.T. arm of Military Police — Evans was “not at all” aware of “Tribute to the Troops,” she told TheWrap.

“We were 24 hours a day, 7 days a week,” the 30-year-old, who packs quite a punch in the form of her finishing move The Women’s Right, said.

Intense, sure, but Evans said the experience “honestly saved my life.”

“Growing up, I did not have the role models that I needed. I didn’t know what I wanted to be. I didn’t know what a positive, happy, healthy lifestyle looked like,” she told us. “All I knew, while looking around, [was] my dysfunctional, drug-infested, mental health. Anger, depression. It seeped [into] and destroyed my family. That’s the life that I knew.”

Dead set on changing her environment, Evans decided at age 19 to enlist in the U.S. Marines, which represented the “most challenging s—” she could come up with. There, Evans says, she found the “confidence, discipline and grit” she so desperately sought.

Also Read: WWE's The Undertaker on Retirement, Boneyard Match and When Wrestlers' Court Gets Real

Now, Evans is not only a pro wrestler, but she’s also the mother to an 8-year-old girl, Summer. Like “Tribute to the Troops,” motherhood brings Evans’ military background full circle — she says she wanted to be an MP in part to provide aid for the “babies that don’t have a helping hand.”

On Sunday, with that mission in the back of her mind, the “Lady of WWE” will shift her focus to the men and women in uniform, as well as their families.

“I know not only what the military goes through — the veterans, the active-duty — but their spouses, their kids,” Evans, who can also be seen every Monday on WWE’s “Monday Night Raw,” said. “They’re going through hell. The divorce rate’s high, the arguments are high. The veterans are tired, the active-duty — they go through a lot.”

Veterans and active-duty military members, take an hour off on Sunday to catch Lacey Evans in action — and thank you for your service.