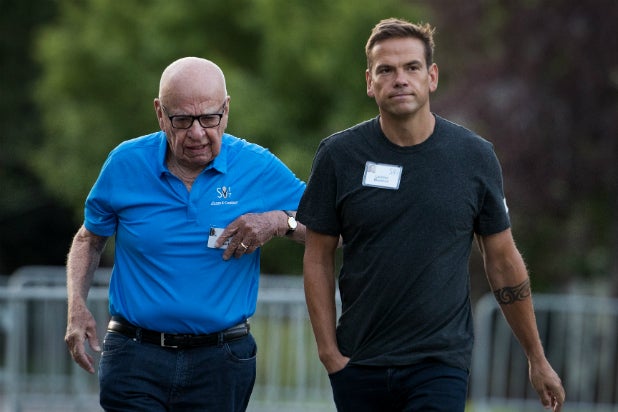 Lachlan Murdoch, CEO of the new slimmed-down Fox Corp., on Thursday squashed any idea of realigning with the Murdoch-controlled NewsCorp. “We will not reunite with News Corporation,” he bluntly said at Fox’s Investor Day.

Instead, the new entertainment company will stick with its “efficient capital structure,” Murdoch said, only taking “measured risks.” He added that the new company, which is heavy on live sports and news since selling off the bulk of its film and TV assets to Disney earlier this year, will remain “focused” and “won’t get distracted.”

Fox and the Australian-born News Corp. spun off from one-another in 2013. They’ll stay cousins and not brothers, Murdoch said.

“I can see no logic in reversing the benefits of those defining actions,” Lachlan (pictured above, right), the son of media mogul Rupert Murdoch (left), said.

Lachlan was also speaking there about his executive team’s decision to not re-purchase its RSNs (Regional Sports Networks)  from Disney. Instead, Sinclair gobbled up those channels from Disney for $10.6 billion about a week ago.

The Walt Disney Company purchased most of Fox’s assets for $71.3 billion. That mega-deal closed in March 2019.

New Fox expects 50% of its future revenues to come from live sports and news advertising and the other half to come from subscriptions, including retransmission fees, the Murdochs — and Chief Operating Officer John Nallen — repeatedly stated Thursday morning.