Say “ciao” to your first official look at Lady Gaga and Adam Driver in “House of Gucci.”

Set to Blondie’s “Heart of Glass,” the trailer, which debuted Thursday afternoon, provides a glimpse into the drama, costumes and accents we’ve all been eagerly anticipating since the glitzy project was announced.

The film, directed by Ridley Scott, follows the assassination of Maurizio Gucci (Driver) as well as the downfall of the Gucci fashion empire. Gaga plays socialite Patrizia Reggiani, Maurizio’s ex-wife, who was tried and convicted of orchestrating his murder after he left her for a younger woman. 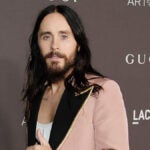 1970s glam aside, the trailer does hint at the darkness of the based-on-a-true-story flick.

“I don’t consider myself to be a particularly ethical person,” says Gaga as Patrizia.

The movie will be the multi-hyphenate superstar’s first major film performance since winning the Best Original Song Oscar and a Best Actress nomination for her performance in “A Star Is Born.”

“House of Gucci” stars some other people you may have heard of: Jared Leto, Jeremy Irons, Al Pacino and Salma Hayek. It was written by Roberto Bentivegna and is based on Sara Gay Forden’s novel “The House of Gucci: A Sensational Story of Murder, Madness, Glamour, and Greed.”

According to CEO Marco Bizzarri, Gucci cooperated with the production and allowed them complete access to their archives for that too-die-for wardrobe.

That’s not to say all is well within the Gucci dynasty.

Patricia Gucci, Maurizio Gucci’s second cousin, told The Associated Press that the family were “truly disappointed” by the film.

“I speak on behalf of the family,’’ Gucci said to the outlet. “They are stealing the identity of a family to make a profit, to increase the income of the Hollywood system….Our family has an identity, privacy. We can talk about everything. but there is a borderline that cannot be crossed.”