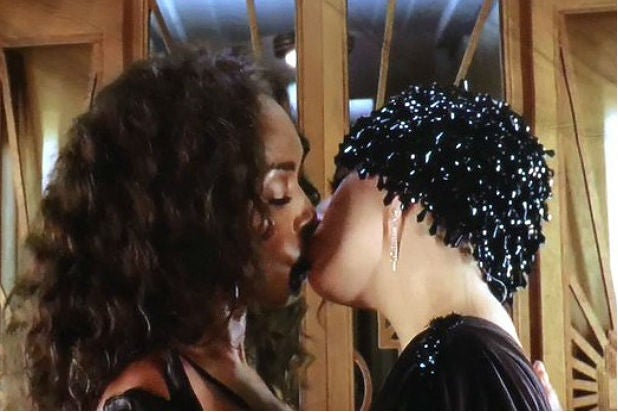 (Spoiler alert: Please do not read on if you’ve not watched Wednesday’s episode of “American Horror Story: Hotel”)

“American Horror Story: Hotel” amped up the raunch factor on Wednesday with an X-rated lesbian love scene between Lady Gaga and Angela Bassett.

Showing off her impressive body, Bassett made her debut as Ramona Royale — first with a her wordless taser attack on Donovan (Matt Bomer) and then in a sexy clinch with Gaga.

Bassett plays a former ’70s blaxploitation star transformed into a vampire by The Countess, who later turned into a jealous lover when Royale shunned her by getting her teeth into a ’90s rapper she met at Hotel Cortez.

Royale’s quest for revenge for being cast out of the hotel is sparking the promise of a bitter bitch-on-bitch battle to come.

“The first day, the first scene, we were clinched in an embrace,” Bassett recently told TheWrap about filming the scene with the iconic “Bad Romance” singer. “I’m having a great time kissing on her.”

While some were shocked by Bassett and Gaga’s raunchy love scene, other social media users were entranced by the action and wanted more.

“110% would not mind being in an Angela Bassett/Lady Gaga sandwich,” one eager Twitter user wrote. “I’m not even gay but Angela Bassett & Lady Gaga are some bad bitches,” said another.

One user marveled over how “timeless” Bassett looked at age 57, while “being freaky” with the 29-year-old pop star.

See the tweets and sexy GIFs below.

That moment when Lady Gaga makes out with Angela Bassett!!! #AHSHotel

I'm Not Even Gay But Angela Bassett & Lady Gaga Are Some Bad Bitches..Ain't Lying

Angela Bassett hasn't said a word yet and she's already given me my entire life. #AmericanHorrorStory #AHSHotel

Just when you thought AHS was getting boring, a gay kissing scene and lady Gaga show up to lure you back