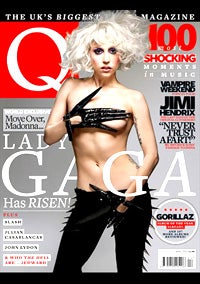 The March issue of U.K. music magazine Q is causing a stir – in the U.S. – over a cover image featuring a topless Lady Gaga.

According to Q, some stateside retailers feel the cover shows too much of Gaga’s left breast.

The shot also exposes a rarely invoked New York state law banning public display of the “lower boob” area underneath the nipple. At least that’s what the publisher says (via Folio):

Certain U.S. chains have said they will stock Q285 only if the offending area is covered up, also expressing some concerns over "crotch grabbing." New York State law also doesn’t permit showing anything below the nipple.

I asked Q magazine which chains are boob-balking and haven’t heard back, but I’d be willing to bet a duet with Elton John that it’s Hudson News, which has a long history of covering up covers it deems inappropriate.

The retailer covered up Jennifer Aniston’s 2008 GQ cover for a similar “offense,” as well as five consecutive covers of FHM in 2006, including one featuring Brooke Hogan, Hulk Hogan’s then underage daughter — which prompted liquor advertisers to pull out of the magazine.