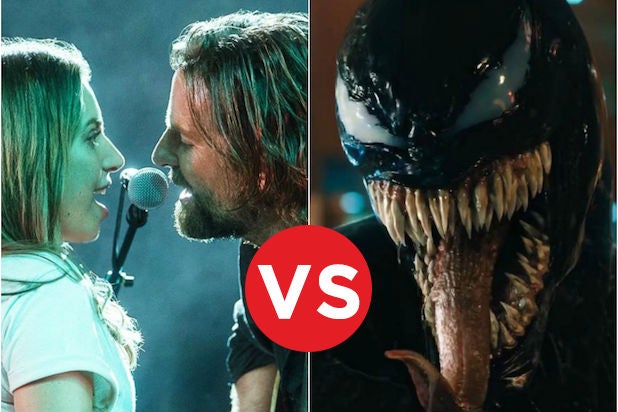 Twitter users who identify themselves as Lady Gaga fans are taking to Twitter in droves to talk smack about “Venom,” a comic book movie starring Tom Hardy that is opening in theaters this weekend against “A Star Is Born” — starring, of course, Gaga herself.

“I am the biggest marvel fan but I just watched #venom and I don’t know what to say. Easily the worst movie this year. I expected so much better and now I’m just disappointed,” tweeted scores of Twitter users, who appeared to copy and paste the same, and similar, messages across their accounts.

The online trolling of Sony’s comic book film appeared to follow Monday night’s “Venom” premiere as a groundswell of Twitter accounts tore down the villain movie in a multitude of tweets.

Twitter user and Lady Gaga fan, @gagasbaristaa, who shared only that his first name is Jeremy, told TheWrap he first saw the ongoing stream of identical tweets on Tuesday morning. He said he decided to give “Venom” a negative shoutout because he found the campaign to be funny.

“I won’t let my son watch #Venom it’s so ugly and not something God would like. My family is going to watch #AStarIsBorn xoxo…,” read his rendition on Twitter.

I won’t let my son watch #Venom⁠ ⁠ it’s so ugly and not something God would like. My family is going to watch #AStarIsBorn xoxo ????

According to Buzzfeed News, which also spoke with a “Venom” troller who identified as a Gaga fan, the behavior doesn’t come as a surprise. Gaga fans have previously been observed initiating troll campaigns against other artists and fan groups. In 2013, Lady Gaga asked her so-called Little Monsters to change their aggressive online behavior after they directed their ire at Katy Perry fans.

Sony, the studio behind “Venom,” had no comment when reached by TheWrap.

“We didn’t approve of her last album, yet she gave it to us anyway,” @gagabaristaa said. “So we respect each other.”