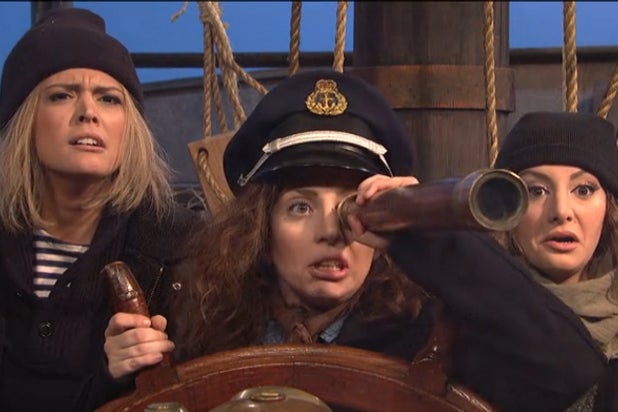 The salty air has grizzled the voices of the “SNL” women and worn aware their feminine charms in an unaired sea-faring sketch from Saturday’s show, captained by host and musical guest Lady Gaga.

Some were affected by the high seas more than others apparently, as fan-favorite Kate McKinnon sported a full-on beard in the skit, where the womenfolk take over the whaling ways of their men who have succumbed to scurvy — or herpes.

It was probably herpes, the introduction voiceover explains.

The ladies of late night did their best to put wind in the sails of the role-reversal skit, full of puns (worse than ours here), playboy mermen and female-centric pirate jokes like this: “Shiver me tampons!”

In the scene, Moby Dick of course was replaced with Moby Puss: the white whale who borrowed Gaga’s earrings and never gave them back. To make the rivalry worse, the mammal started dating the pop star’s ex-boyfriend, Doug.

It is fairly clear why the sketch did not make the final cut in a strong episode, but it’s still a fun view.