Gaga’s first piano will be on the auction block May 21 at the Hard Rock Cafe in New York, as part of the Music Icons auction from Julien’s Auctions.

The instrument, on which the “Born This Way” singer wrote her first song when she was five years old, was previously on display at the Rock and Roll Hall of Fame, as part of the its Women Who Rock exhibit.

According to Julien’s, the piano “is an extraordinary highlight from the pop icon’s incredible life and career.” 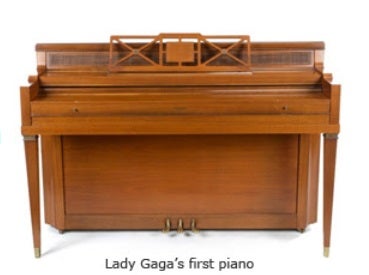 The auction house estimates that the piano will go for somewhere in the $100,000 to $200,000 range. Hopefully that includes a tuning.

If that seems a bit steep, consider the fact that portions of the sale will go to Gaga’s Born This Way Foundation, so at least you’ll be helping a charity while emptying out your wallet.

Other items going up for bid: Stevie Ray Vaughan’s 1951 Fender Telecaster, given to him by his brother Jimmie and dubbed “Jimbo.” Prepare to shell out somewhere between $400,000 and $600,000 for that particular piece.

Also heading for the auction block: Kurt Cobain’s letter to his former label boss David Geffen, suggesting that he might bring an end to Nirvana over an unflattering 1992 Vanity Fair profile; and David Bowie‘s response to the first American fan letter he received in 1967. Those items are expected to fetch from $20,000 to $30,000 and from $4,000 to $6,000, respectively.

Better hit up the Coinstar with that jug of spare change now.